A bazillion years ago, a fellow foodie sent me ice pop bags from Guam. I decided now was the time to use them. I found a recipe for Vietnamese coffee and carefully funneled the liquid into the bags. The trick was sealing them. For some reason I didn’t think of tying them with string, so resorted to using office binder clips to keep them closed while they froze. (Update: a very smart friend has since suggested sealing the bags with heat: folding over the top of the bag and running a lighter along the edge sealed them perfectly.)

People went nuts for these. My brother called it the “drug course” because they were so laden with caffeine that everyone was buzzing and giddy. Most people had two. A few even considered having three. Recipe here. 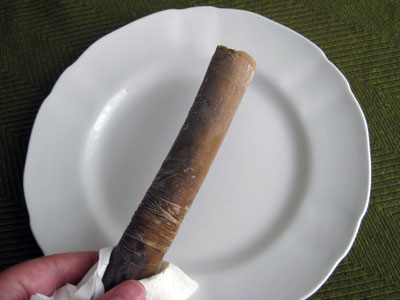