I absolutely love Indian food. Love, love, love it. Which is why I’m crushed that I’m so bad at cooking it. About once a year I’ll try to make an Indian meal, and without fail, I have near catastrophic results. I used to blame it on the recipes, but now Iâ€™m starting to see the common denominator in all these failures: me.

Laura at the Seattle Weekly recently turned me on to Suvir Saran of Devi in New York; she compared him to Vikram Vij of Vij’s in Vancouver. I’m a huge fan of Vij’s so I was excited to learn about Suvir’s latest cookbook

, and was even more excited to see sample recipes posted on his website—a perfect Indian menu handed to me on a platter.

This is where I’d like to state that even the best recipe can end up horribly wrong when executed poorly… or if you start making weird substitutions.

My first mistake was to substitute goat for the lamb in the Lamb Curry with Coriander, Garam Masala and Coconut recipe. (Yes, I actually had goat in my freezer from my last trip out to Exotic Meats.) The goat was way too fatty and overpowered everything in this dish. Plus I didn’t grind my spice paste enough so it was grainy and caught in the back of the throat.

The second mistake was making a half recipe of the Rice Pilaf with Standing Spices, but forgetting to halve the amount of oil. Oops. The rice was barely edible because of the greasiness, but it would have been incredible had I followed the recipe properly.

My third mistake was buying the wrong yogurt for the cucumber raita. Somehow it was too thin (or my cucumbers were too water-logged) and the raita ended up anemic and thin. Next time I’ll get some thick, creamy, goat milk yogurt. Mmmm.

The Carrots with Cumin and Lime recipe was probably the only thing that I made properly. The only problem was that the recipe called for curry leaves. I managed to find them at Uwajimaya but I have to say that curry leaf is one of the most unusual and bizarre flavors I’ve ever tasted. I’m at a loss for words to describe the smell or the taste—except to say it is pungent. Curry leaves rank right up there with the likes of asafoetida and Szechuan pepper in terms of strangeness. The weird part is that I can’t even tell if I love them or hate them. I suspect that I will grow to truly love them over time, but for now I have to take baby steps and use smaller amounts until I get used to the taste.

The last mistake never even made it to the table. This was a recipe for tamarind chutney, which I planned to serve with the papadams I found at PFI. The chutney was actually incredible. Until I burnt the hell out of it.

It’s been over two years since I’ve had a dinner go this wrong, but it was a good lesson for me not to try five new recipes in one sitting. Especially in a cuisine where I’ve proven myself to be completely incompetent. 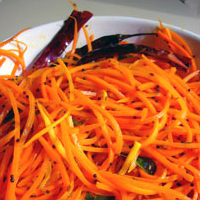 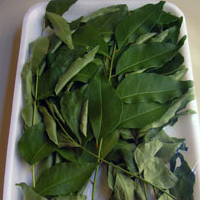 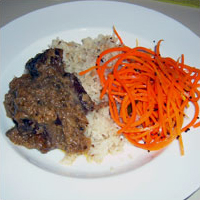 22 thoughts on “Indian Goat Stew (a.k.a. Disaster in the Kitchen)”