Kevin over at Seriously Good just tagged me for the “10 Weird and Random Facts About Myself” meme. Here are mine:

1. When I was 12, I started a newsletter called “Kitty on the Front Page.”

2. I think it’s disgusting when people put lemon slices in their water.

3. I like to stay up really, really late watching bad TV.

4. I’m a native Seattleite and I don’t drink coffee.

7. I microwave things in plastic containers.

8. I would never date a vegetarian.

10. I live in Seattle and I hate the fucking rain.

I’ve been watching (and reading) with amusement as this meme went around. Just when I thought it was safe, William from Never Trust a Skinny Chef tagged me.

So… my 23rd post was about a day trip over to Bainbridge Island and my fifth sentence was about licorice:

I have never really liked licorice very much but after trying some of Zach’s I’m open to the possibility that I just don’t like bad licorice.

This is actually a very fitting sentence for me as I think that I would like just about any kind of food as long as it’s was done well.

I seriously doubt that I know anyone who hasn’t already been tagged, so I will just leave it at this: if you want to participate, leave me a comment and consider yourself tagged!

When I read The Scent of Green Bananas’ post titled “Where memes come to die,” I started laughing. Then I remembered that I had been tagged for the Childhood Food Memories Meme by Accidental Hedonist back in August and then again by Chubby Hubby in September.

Despite my lateness, I really did want to do this meme. It’s an interesting idea and became even more “interesting” when I compiled my top five. Sadly, most of my food memories from childhood revolve around secrecy and foods that are bad for you. Which is odd because I grew up around lots of food—really, really good food. So what I craved as a child were the processed foods that all my other friends were eating.

I’ve done a few comparisons for an example:

FRIENDS: Sugar Smacks
ME: Cheerios (upon which I heaped spoonfuls and spoonfuls of sugar when my mom wasn’t looking)

Okay, so you get the picture. I’m just trying to explain (disclaim?) why my childhood food memories are so strange…

1. This memory has always stuck with me, partly because it’s so shameful and partly because it’s so hilarious: One hot summer day, my mom found me huddled up in the corner of the porch (I obviously knew I was doing something bad), with an entire stick of butter in my greasy fist. I was licking it like a lollipop. And from what I recall, I wouldn’t give it up.

2. I have very fond memories of McDonald’s Chicken McNuggets with Sweet and Sour Sauce. As a kid we’d stop by McDonald’s almost every Sunday, after the family game of tennis, and my brother and I would each get a container of McNuggets. The strange part is that everyone accepted this as normal behavior and treated it like a reward for exercising.

3. Another odd memory I have is of my mom telling me to dust the household plants. For some reason I got it in my head that if I washed them, I could then eat them. I managed to eat half a leaf before my poor mom noticed and asked me WTF I was doing. What’s really funny is that we had that plant for a really long time—and until it died it always had a bite mark taken from one of the leaves.

4. I was desperately addicted to Twinkies during my middle school years. I would stop by the corner gas station EVERY DAY on my way home from school and purchase a two-pack, which I then consumed in secret. There was something about that artificial fluff stuffed into a spongy container that I found wildly comforting.

5. The last memory I’m going to share is the time I ate MSG. We had a container of it in our spice drawer (probably from my Chinese grandma) and one day curiosity got the better of me. It was the most disgusting thing that I’ve ever tasted. Hands down. MSG is supposed to enhance the flavor of whatever you’re eating, and in this case it was just enhancing the flavor of my mouth. Imagine the five people you know who have the worst breath. Now imagine them licking you all at the same time.

I’ve probably over-shared, but there it is. I’m passing this on solely based on who I think might actually participate AND who, as far as I can tell, hasn’t already participated:

Okay, I got tagged twice on this one because I took so long to post (sorry)! This time I was passed the torch by Melissa over at The Traveler’s Lunchbox and then Fatemeh at Gastronomie. Here goes… 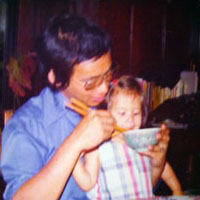 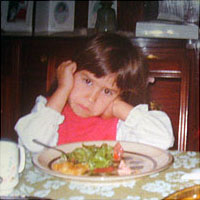 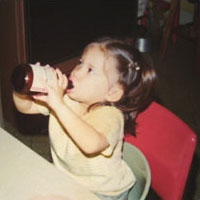 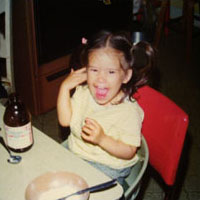 Any question you missed in this meme, that you would have loved to answer? Well then, feel free to add one!

Josh over at The Food Section has tagged me on the Five Favorite Books Meme that’s been going around. It looks like the original topic was open to any type of book, but like Josh, I’m going to stick to food / cookbooks.

1. Total number of (cook) books I’ve owned:
I just weeded through my collection and ditched a few that weren’t getting any play, so I’m going to guess somewhere in the vicinity of 70.

2. Last (cook) book I bought:
I haven’t bought a new cookbook in a while (for shame!)—I’m still trying to get through the cookbooks I already own, plus two large binders of recipes I’ve clipped from F&W and Saveur over the years. But to answer the question… I got on this bent of buying used cookbooks from the 50’s that have weird and unusual recipes. So my last purchase was either a lard cookbook or a “Fun with Aspic” cookbook.

3. Last (food) book I read:
It’s been a while since I’ve read a purely food dedicated book (besides cookbooks, of course), so I think the last one was The Book of Salt

by Monique Truong—a beautiful and sad story about a gay, Vietnamese cook working for Gertrude Stein in Paris. I loved that book.

5. Which 5 people would you most like to see fill this out in their blog?

A great big THANK YOU to AugustusGloop for roping me into this. I am supposed to answer a few highly personal questions about my musical tastes and then pass the baton. The problem is that I am what you’d call… musically challenged. So I listen to a lot of NPR.

1. What is the total amount of music files on your computer?
I have no clue, but I CAN tell you that anything on my laptop was not put there by me. I think people feel bad that I have a musical disability so they offer to put things on my iTunes list. It never gets listened to.

2. The CD you last bought?
Marianne Faithfull – Before the Poison, and I bought it just last week. This was a total fluke because the last CD I bought before this was about two years ago. I never go into record stores, but I was eating at the Easy Street Cafe—which happens to be attached to a record store. So they told me to wander around in the store while I waited for my table. Clever ploy.

3. What was the song you last listened to before reading this message?
Uhhh. Oh, wait! KEXP was on, and I got the message at about 11am this morning. So that would make it… Myrkur by Sigur Rós—although I couldn’t tell you what it sounded like even if you offered me a million dollars. Thank god for playlists.

4. Write down 5 songs you often listen to or that mean a lot to you.
I can’t really list songs because I don’t know the names of many songs. The best I can do is list artists.

My latest favorite is A Night at the Hip-Hopera by the Kleptones. They took Queen songs and combined them with hip-hop lyrics. I’m obsessed with it and it drives my boyfriend nuts.

I really love Nina Simone and Cassandra Wilson because they’re both so, so sultry.

I also listen to a lot of Ani DiFranco. I couldn’t really even tell you why. She has the biggest section in my CD collection—but that sounds misleading and like a have a collection. It’s not like that. And, no, I’m not a lesbian.

Lastly, I would have to say, uh, maybe Neko Case. Also because she has that sultry thing going on.

5. Who are you going to pass this stick to (3 persons) and why?
This is my favorite question and actually the only reason I did this survey. I am gleefully passing the buck to…

Molly, because I’d like to know a little more about you before we meet for dinner.

MeatHenge because we’ve been having some great conversations about pork. And you talk like a cowboy, so I’m curious…

KitchenMonkey, because I’ve always wanted to know what monkeys listen to.