Mandy over at Monogram Food Solutions emailed to ask if she could send some bacon jerky my way… guess what my reply was? Hells yeah!

You can’t see from the tiny image below, but the tagline says “You just can’t stop eating it!” and I actually couldn’t. I was sent two packages and it was gone in two days. And I didn’t even share. Gulp.

The jerky was chewy for bacon, but not chewy like beef jerky; somewhere in between. And it was a good combination of sweet, smokey and salty. I ate most of it straight out of the bag, but a few slices managed to make it into a sandwich. It can’t stand in for real bacon due to the non-crispy factor, but I would definitely eat this while camping, or on a road trip, or just because it’s a Thursday. 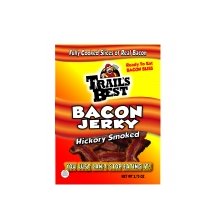 I’m sorry we’ve drifted apart. I know it’s my fault. The calls became less and less frequent, until I stopped calling all together. I know it’s been over a year, but I miss you. I’ve been going though old photos and remembering what fun we had together.

I was out back looking at the tiny little tomatoes that are forming and wondering if someone has invented micro tomatoes yet (they have). Tomatoes the size of peas. Which led me to think of micro greens and sprouts. Which in turn made me think of Food Jammers.

Food Jammers consists of three brilliant, inventive and persistent guys who love food and power tools. It’s like watching friends sit around and talk about food, playing “what-if”, but then you actually get to see the follow-through.

In one episode, they want to make SuperFoods. Which in and of itself doesn’t sound that hard: get your seeds, pack them into jars and let them sprout. But they take it one step (or several) further and end up making a rotating carousel in which the seed jars move around a light source that simulates the sun.

In another episode, they are going camping and want a full thanksgiving dinner. By trial and error they end up freezing the turkey solid, slicing it with a saw, dehydrating each slice and reassembling it into a whole turkey (or something that resembles a whole turkey). And while it doesn’t exactly turn out as planned, it was fascinating to watch, and as a by-product, they end up making a kick-ass fruit leather jacket with the dehydrator.

The last episode I saw involved a food train that served up an amazing looking dinner. Each item was cooked in a hollowed out log and transported to the dinning area on a cobbled together track.

I’m lucky enough to have seen a few episodes because my brother knows them and has their dvds. But in trying to view more recent shows I’m dismayed to find out you can’t buy them, rent them or stream them (legally). You CAN get them via torrent, or if you’re a technical god and know how to spoof your IP so it looks like it’s coming from Canada, you can view them on foodtv.ca.  I suppose you could also plan your future trips to Canada, Australia or Latin America based on tv scheduling.

I wish, wish, wish American Food TV would pick them up. I really want to see the Hot Tub Shabu Shabu and the office filing cabinet smoker. If you too would like the see these, you can email Food Jammers at iwantfjonmytv@foodjammers.com or contact foodtv to request American programming. Please.

Bacon is so going to kick Mayo’s ass…

I might be the only one that finds this funny:
My first post in months (and months) is actually to guide you to another site.

Celia Cheng at Cravings recently interviewed me for her special feature on the year of the pig: I HEART OINKERS!!!

A while back, Santos from The Scent of Green Bananas wrote a post about ice candy bags. Her ice pops looked so beautiful that I was tempted to make my own. I had no clue where to find the cute plastic bags, so Santos offered to send me some, which then turned into a “let’s send each other a goodie package”. Then a month later, a package arrived from Guam.

In the package were two packages of the coveted ice candy bags. I’ve yet to use them as the weather in Seattle has been so dreary that just the thought of opening the freezer makes my bones cold. I’m saving them for the summer time.

The last two items were a little more random.

The box of Korean Chicken Snacks looked scary, but after my bout with bacon spray, I figured I was ready to take on anything. The Chicken Snacks reminded me of Munchos (remember Munchos?)—except that they were shaped disturbingly like chicken drumsticks and tasted like stale chicken bullion.

Lastly, Santos sent me a bag of maxi-pads.

This seemed a little too personal. But then I found her note telling me that no, she wasn’t sending me maxi-pads, but rather, clever little pads that are used to soak up and dispose of cooking oil. So when you’re done deep-frying your chicken, French fries, or what have you, you toss in this pad (which has crazy absorbent properties) and it swells up and consumes all the oil. Then you put the whole thing in the trash. It’s all very handy and clever. Although, I wish they were shaped more like… well, anything other than a maxi-pad.

I have to give a shout-out to my new hero, Daniel.

Daniel recently hosted the pork fest to end all pork fests with over FORTY POUNDS of pork—and he even made porcine desserts. This was the incredible menu:

Yes, those were just the appetizers…

Are you salivating yet? But wait! There’s more…

And now for dessert…

Pictures and a detailed account can be found here and here.

Bravo Daniel. Next time, I’d like to be invited ;-)

A friend just sent me a link to this incredible invention that will make recycled / recyclable dishes on demand:

MIT Media Lab’s Counter Intelligence Group, which develops innovative kitchen designs, has created a machine that makes dishes on demand and recycles them after diners have finished a meal. The dishes are made from food-grade, nontoxic acrylic wafers, which are shaped into cups, bowls and plates when heated, then resume their original wafer shape when they are reheated and pressed.

I can’t believe it’s been a year. It’s been so much fun writing about all my eating adventures. It has also helped hone my passion (obsession?) for bacon. Thanks to everyone for all the great comments and all the great food recommendations. Keep ‘em coming!

So how did I celebrate? Bacon would be the logical choice. But no, I celebrated with homemade wild boar jook. Bet you didn’t see that one coming… 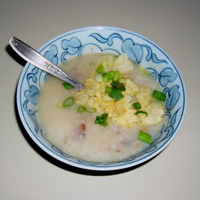 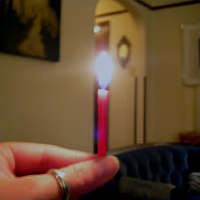 I’ve been obsessed with balut ever since I had dinner with Cindy a few months back. It started off innocently enough. I was telling Cindy that I had a real phobia about cracking open eggs; I’m convinced that one of these days I’ll whack one open and find a partially developed chicken inside. This little scenario runs through my head every single time I crack open an egg. After relating my phobia, Cindy went beyond the bounds of decency and proceeded to tell me about balut.

At first I was convinced that she was misinformed. People don’t eat fertilized duck eggs ON PURPOSE. Duck eggs that contain bones, beak, eyes and feathers. Her story was screaming ‘Urban Myth’. But I soon realized that it was true; Balut is considered a huge delicacy in some parts of the world. In the following days I read as much as I could about balut. I found it fascinating in a grotesque and horrifying way—given my phobia. I even emailed The Sneeze to try and get Steve to eat it.

Low and behold, Eddie was the one who pulled through. I was thrilled when I saw his latest food foray:

http://deependdining.blogspot.com/2005/09/balut-egg-of-darkness-pinoy-pinay.html
(a.k.a. Eddie eats balut. And lives to tell about it.)