I was asked by the “Magical Elves” at Top Chef to pass this along to you all:

Bravo’s Emmy and James Beard Award-winning series and the No. 1 rated food show on cable, “Top Chef,” will be returning for a sixth season. Open calls for chefs interested in competing in the high-stakes culinary competition series will be held in cities across the country starting this weekend. Additional casting information for these series is available at www.BravoTV.com/casting.

Good luck to my friend Scott Yockey Jones, who will be trying out!

In case you missed the last post, tonight’s the night of the Well Fed Blog Warming Party!

This is a chance to get together and meet other Seattle area food bloggers and food blog readers. Everyone is welcome. We’ll be celebrating at Barca (on Capitol Hill) tonight at 7pm.

If you live near Seattle, stop on by and say hello!

Are you obsessed with food? Do you own a blog? Are you just really bored?

Come to our blog warming party, where we will be celebrating our freshly launched Well Fed Network. This is simply a chance to get together and meet other Seattle area food bloggers and food blog readers. Everyone is welcome.

We’ll be celebrating at Barca (on Capitol Hill) on Thursday, January 19th at 7pm.

If you live near Seattle, stop on by and say hello!

Pim of Chez Pim has organized a wonderful event to help raise funds to support the victims of the devastating earthquake in the Kashmir region of India and Pakistan.

This year the fundraiser is in the form of a raffle with some really fantastic prizes. For every five dollars you donate, you will receive a raffle ticket for an item of your choice.

My raffle gift contribution is a jar of Casina Rossa Truffle & Salt (valued at $30). This salt is amazing and packed with truffle flavor. It elevates simple things like mashed potatoes, scrambled eggs, fresh mozzarella and French fries to a heavenly level.

To enter, simply choose what prize(s) you want and specify this when you make a donation. This event will end on December 23rd, and the winners will be announced after January 1st 2006. 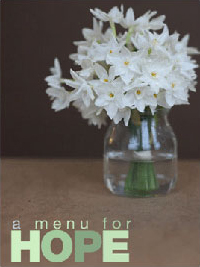 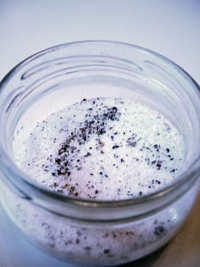 I just received the following email from a friend:

I was just talking to my co-worker, who was in Vancouver last weekend. She was thanking me for recommending Vij’s to her, and said that when they ate there last Friday night they had a little chat with Vij—who said he would be in Seattle this week

SCOUTING LOCATIONS FOR A SEATTLE VIJ’S.

He’s partnering with the Wild Ginger dude, and they hope to be open sometime next year. Holy crap. I’m seriously trembling.

Anyone know the scoop? I, personally, would love to have a Vij’s in Seattle. Can you say lamb popsicles? Mmmm.

UPDATE: I just emailed Vij’s and Vikram sent a very nice reply saying that he’s coming to Seattle in September to look at spaces for a new Vij’s—and will decide after that trip. Keep your fingers crossed!

To get in the holiday spirit, one can check out a few of the hamburger sites out there, spend some time boning up on hamburger trivia, or maybe just send someone a lovely greeting card. Myself, I think I will celebrate with a big, fat burger from CC’s Gourmet Burgers and wait until January, when all the good celebrations happen.

Zach just sent me this press release and assures me it’s real:
MARTHA STEWART TO HOST NEW VERSION OF NBC’S “THE APPRENTICE”

Casting calls are happening in most major cities starting February 4th; Seattle is on the 26th. I’m going to try and find out where it’s at and go hang around outside and see what kind of neurotic people show up (besides me).

Just a heads up that the next 25 for $25 dine out promotion starts March 1st, so plan accordingly. It looks like details on the 25 participating restaurants and menus will be posted on the 18th at nwsource.com.

I’ve taken advantage of several of these promotions over the years and I’ve found that it’s really easy to go way over the advertised $25. They tempt you with cocktails, wine and other items from the main menu. If you stick to your guns and just get the three-course meal then it’s a great deal, but otherwise you can end up spending a bundle. The best meal I’ve had so far with this promotion was at Restaurant Zöe, so if they’re on the list this year, I’d definitely recommend checking it out.