After reading about the giant gerbils, I started craving rabbit. I’ve never actually cooked it before so was a little surprised when I opened up the package. If it tastes like chicken, shouldn’t it look like chicken?

The back legs looked normal enough, so I left them alone. But then you have these two long pieces of meat that are attached to the backbone and they have these weird dangling ‘flaps’. After consulting several cook books, I finally figured out that you roll them up into little logs of bunny meat and then tie them like a roast. Generally you don’t eat the front paws, but since I was doing a braise, the book said to include them for flavor.

I browned, braised and tasted. I couldn’t believe what an amazing sauce the rabbit made. I paired it with a chorizo bread pudding, similar to one I had once at Eva. It was delicious! A little difficult to eat because of all the bones, so next time I’m going to figure out how to de-bone the saddle and tie them into medallions. 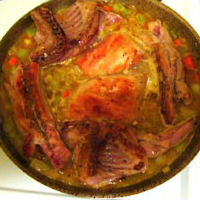 Please note: Not all bunnies are for eating.

I woke up at an ungodly hour (for me, anyways) to pouring down rain… a perfect day for campaigning. We arrived at this crazy Ballet school in Ballard where they were handing out assignments and Hostess cupcakes. After waiting around, we finally met our team leader, who was nice but kooky; she drove us to our neighborhood in a car that was decorated with fairies.

We probably knocked on about 60 doors and talked to a handful of people, but saw only one Bush supporter, thank god. So I was feeling optimistic and excited about election night.

By the time we made it home we were soaked and freezing cold (apparently, my left shoe is not waterproof) and warmed up with some blueberry tea. I managed to drink a little too much and had a hard time getting dinner on the table, but we assembled some quick Fontina ravs made with won-ton skins. Then I made poached beef with leftover stock and some braised bok-choy.

By the time we finished dinner, Florida had been called and I was starting to feel sick. We watched the Daily Show (I heart Al Sharpton!), which was frighteningly sad-you could tell the cast was having a hard time finding the humor-but it was a welcome relief from CNN.

I went to bed devastated and stunned.

After eating so much caramel over the weekend, I was craving something healthy, so I made a quick seafood salad with crab, smoked salmon, butter lettuce, tomatoes, avocados and a russian dressing. Yumm.

Then we carved some pumpkins. Mostly because I wanted toasted pumpkin seeds.

I didn’t want to be watching the first presidential debate alone, in case something went tragically wrong. So I decided to have a little dinner party with lots of alcohol—for either celebrating or dulling the pain.

I actually hadn’t heard Kerry speak before and was really impressed. Although, I do have to admit that Bush’s performance that night was so god-awful that he would have made a brick sound brilliant by comparison. I had so much fun screaming at the TV and debating whether it was possible for Bush to be more stupid.

This is what we drank:
Zach’s Margaritas

Everything was delicious and we were so elated at the end of the debate that we went out to celebrate at Cafe Septieme and then decided to top the night off with some cards and more drinking.