Months before the party, I started my online research. Most sites recommended burying the pig in the ground, but my mom’s place has a septic system, so I quickly ruled that method out. Next I looked at spit roasting but reconsidered after reading horror stories of pigs falling off their spits and being engulfed in flames. When I came across the Three Guys From Miami method I knew I had a winner; it was easy, safe and (relatively) cheap.

I wanted a quality pig, so I called Don & Joe’s Meats on what happened to be the 4th of July.

D&J: Um, you need to pre-order those. Try Uwajimaya. (What he really meant: Are you freaking insane? Lady, you can’t call us up on the biggest BBQ day of the year and order a whole pig…)

Me: I am calling to pre-order.

D&J: How do you want it prepared?

D&J: We can butterfly the body but not the head.

Me: Why not the head?

D&J: Our bone saws break when they go through teeth.

At this point I was getting nervous; would I be able to hack through a pig skull with a hatchet? I flashed back to the time I made duck soup and had to decapitate the duck. I didn’t handle that well. Then I remembered having to chop up a lobster while it was still alive; I screamed until it finally stopped moving, which took almost 30 minutes. Hmmmm…

Step 4: Picking up the pig

The day before the party, we went down to the Pike Place Market to pick up the pig which was, thankfully, packaged in a box; I didn’t need to lose my nerve just yet. I was giddy and dancing around while the butchers laughed and helped me load it into the truck.

After we got up to Whidbey, we opened up the box and were slightly terrified. The pig was bright, bright pink with a trail of blood dripping from his mouth. He belonged in some sort of B-grade horror movie. My friend Kait likes to dissect things so she made swift work of splitting the head while I made the mojo. We slathered the pig in the marinade, wrapped him in plastic and a tarp, deposited him in the bathtub and topped him off with ice.

Per the TGFM method, all we had to do was find some cinderblocks, some pieces of metal, and someone who can weld. Luckily, I know a lot of artists who work in metal. We headed over to a friend’s house, who graciously let us use her welding shop. Kait, again to the rescue, with her (slightly rusty) welding skills. It was a miserably hot day and every minute that passed felt like an hour.

Step 7: Putting together the oven

When we got back to the house we found a nice, large flat spot in the front of the house where we arranged the cinderblocks. My mother over-worries things and became convinced that the heat from the oven would cause an underground fire and the whole property would go up in flames. I humored her by watering the dirt around the area for about 15 minutes. Then we covered the cinderblocks in tin foil to make a giant oven.

The day of the party was another blistering hot day, so lighting the oven was not fun. I got the coals started in the Weber, then I miserably transferred them to the corners of the oven, one small shovel-full at a time. It was hot, hot, hot. We strapped the pig into the frame, ceremoniously laid him on the oven and tucked him in with foil. Time for cocktails. Kait and Zach made some great Mojito’s and we kicked back and waited for the guests to arrive.

It was actually so hot that day that no one could leave the shade, which made playing croquet in the full-sun back yard out of the question. So we all hung out in the shaded front yard, drinking and watching the pig cook. After four hours the pig was up to temp and we unveiled it. It was a beautiful sight.

The skin needed a little more crisping but the meat was already cooked, so with the help of half the party we took the pig off the oven, spread out the fire and removed three layers of cinderblock so that the pig was just inches from the coals. Another 30 minutes on the coals and the pig was perfect.

Getting a sixty-pound pig onto a carving board was way trickier than I had anticipated, but again, with lots of help we got it off the rack and onto the table. I donned my pink plastic dish gloves, picked up a cleaver and went to town. I probably had a few drinks in me by this point and I have to say that I’ve never had so much fun carving up a piece of meat.

The end result? The meat was good and tender, but not the falling-off-the-bone tender you’d get from burying the pig and slow roasting it for 24 hours. I also wasn’t wild about the marinade—it seemed too citrus-y and I think it may have pre-cooked the meat a bit too much. Next time I’ll try a more savory marinade with lots of salt, garlic and sage and cook the pig in the same method, but over a much lower heat and for a longer period of time.

Everyone else brought some really great Cuban dishes, but the standouts were Kait’s Black Beans and Kathy’s Coconut Bread. We finished off the meal with a delicious caramel dessert that I first heard of at The Pink Door. It sounds crazy and a little trashy, but the only ingredient is sweetened condensed milk. We topped the caramel with fresh whipped cream and toasted walnuts—it was fantastic.

After we recovered from eating too much food, we played croquet by torchlight way into the night. A few of us die-hards stayed up even later playing dominoes and finishing off the rum. It was the perfect way to spend a hot Seattle summer weekend. 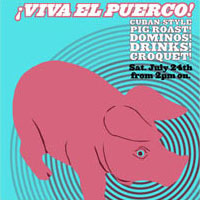 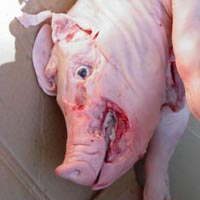 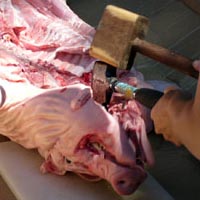 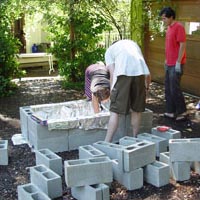 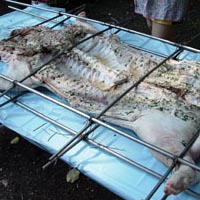 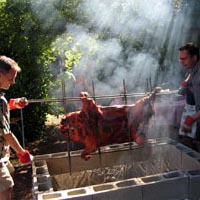 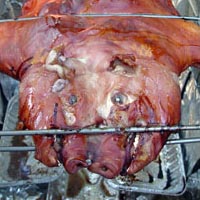 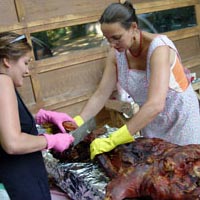 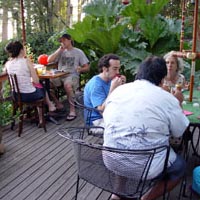 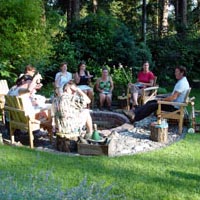 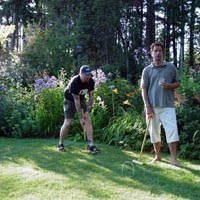 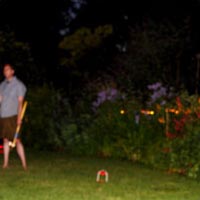