I used to have an English boyfriend and he took me home to England one Christmas. I loved England, but was dismayed by the food; everything was boiled to death or ‘mushy’. Apparently England is populated with geriatrics.

The one thing that I liked was the English Breakfast a.k.a the “Fry-Up”: sausages AND bacon, fried tomatoes, fried mushrooms, Heinz baked beans, soft-boiled eggs and toasted soldiers. I got hooked on the soft-boiled eggs simply because I fell in love with egg cups.

It turns out that my new boyfriend had never tried a soft-boiled egg. I was amazed—first off because he is an egg lover, and second because I have this cabinet filled with egg cups and usually when people have never seen them before, they ask what they are.

So when I found this out, I made him soft-boiled eggs (boil water, gently drop in eggs, return to a boil, reduce to a simmer and take out after 3-4 minutes). After cooking the eggs I put them into egg cups and chopped off the tops with an egg topper. We sprinkled salt and Worcestershire sauce in the tops, then dipped in our toasted soldiers (toasted and buttered bread sliced into thin strips that fit into the holes). I also cooked A&J Meats’ pork and apple sausages, which also fit nicely into the holes and were delicious coated in bright yellow egg yolk. 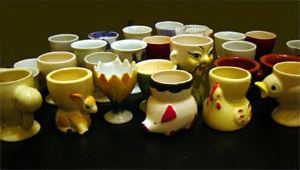 3 thoughts on “An English Breakfast”