Zach is going home for the holidays, so we pretended like last night was Christmas. Except there was no family. And we didn’t cook. Okay, maybe I should just say that we went out for a nice evening and exchanged gifts.

We’re trying this new thing where we switch off twice a month and each choose a new place to try out for dinner. It was my turn to pick and I’ve always wanted to check out The Big Picture movie theater in Belltown. So I wanted to find a restaurant in the area where we could grab a quick bite before the 8:30pm showing. I had been hearing buzz about The Apartment Bistro, so decided to try it out.

I was a little worried that it was in Belltown and that it was a Friday night, but I was hoping that maybe the Apartment would be tucked away on a side-street. No such luck. It’s smack dab in the middle of the scene, right next door to Bada Lounge. It was packed—thankfully not with the meat market scene, but an older, after-work type crowd. Unfortunately that didn’t make it any less loud. The space is TINY and there are no carpets or soft things to absorb sound. The kitchen is tucked into the back, but somehow you can hear everything that’s going on and I think they turn up the music to cover the kitchen noise. So I saw a few diners actually screaming at each other to be heard over the noise; not exactly a fine dining environment.

The wait staff was really nice and got us stools at the bar right away. I had a Stoli martini and it was fantastic. Ice cold with just the right ratio of vodka, vermouth and melted ice. For dinner, I ordered the Miso Butterfish (which was actually black cod) and Zach chose the Grilled Rib-Eye with Cabrales Butter. We requested but never received the Caesar salad, which was too bad because it looked really good—the kind with a thick dressing drizzled over whole romaine hearts.

The Miso Butterfish was amazing. The fish was really fresh and absolutely buttery and the sauce was divine. I love miso, but sometimes it can be overpowering. They used it with such restraint that it almost made you wish there was more, until you realized that’s exactly why it’s so delicious. It came with a ball of rice that was sprinkled with a salty, bright green and addictive condiment. The waitress told us it was furikake—I guess I need to make another trip to the ID to pick some up. Underneath the fish was a delicious and pretty radish sprout salad with a light Asian dressing.

Zach’s gigantic rib-eye steak was equally as good. It was flavorful and chewy with wonderfully creamy garlic mashed potatoes. Drinks and dinner were so great that it made me sad that food like this is being served in what is essentially a meat market. But I decided I will have to go back… maybe at 5pm on a Monday it won’t be so crowded.

After dinner we walked down to The Big Picture. I have to say that this place is so cute and comfortable that I wanted to move in. After the experience at dinner, I was surprised that it was almost empty. We had a few cocktails and the ‘champagne popcorn’ (served in a champagne bucket) with cheese sprinkles. Mmmm. Cheese sprinkles.

Before going home, we stopped in for dessert at Il Bistro, again, surprisingly empty. We split a panna cotta garnished with caramel sauce and pomegranate seeds. It tasted like they used crème fraiche because it had a slightly sour taste—in a really good way. We also had two glasses of Strega which is a potent digestive made from a crazy mix of herbs like mint, fennel, and saffron.

When we got home, we plugged in the tree and opened presents. I got Thomas Keller’s new Bouchon

cookbook!! It’s breathtakingly beautiful and slightly less complicated than the French Laundry one, so I’m excited to try it out. First up: Duck Confit with Brussels Sprouts.

Zach got an octodog. Long live the Frankfurter Converter™. 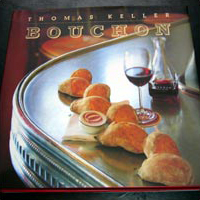 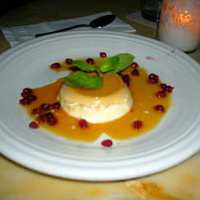