When I used to live in the North end I had a Christmas-time ritual of getting a steaming hot bowl of Pho at the Than Brothers’ on Aurora and then heading up the block to get a $5 tree at Chubby and Tubby. I’d always follow the footprints painted on the store floor that led to the Christmas tree lot, even though I’d been getting trees there since I was a kid and knew the path by heart. Then after purchasing the tree, the cashier would hand me a key and I’d head back into the store and follow a different set of footprints to see if my key would open the treasure chest packed with Chubby and Tubby merchandise.

Now that I live in the South end and Chubby and Tubby is no longer (sniff), I have found the need for a new ritual. I still like to go to the Chubby and Tubby lot, since they open once a year just to sell trees, but now I go to the one down South in Rainier Valley. And what could be a better food pairing for an event like this than Jones Barbeque, just a few blocks away on MLK?

Jones is a small B.B.Q. joint that is dive-y in a wholesome way and serves damned good barbeque—the best I’ve tasted in Seattle. They aren’t open late, so when we got there at 6:15 they had already closed up the dinning area and were out of everything but the ribs. But we didn’t need much else besides two orders of ribs to go.

Each order comes with a good coleslaw that has a nice, balanced blend of mayonnaise and vinegar. We also got an order of their baked beans; the really good, really thick, ketchup-laced, sweet kind. I ordered ribs with a mild sauce, because I’m a wimp, and Zach ordered the medium ones. His were hot (in my opinion) and the sauce was thin and tangy. Mine were also hot, but the sauce was sweeter and richer. The meat on both was smoky and falling off the bone. I love to put hunks of rib meat into the whiter-than-Wonder-Bread bread, add a spoonful of slaw and then run it through the sauce until the bread is falling apart and I can barely get it to my mouth before it disintegrates. It’s a perfect way to get into the holiday spirit. 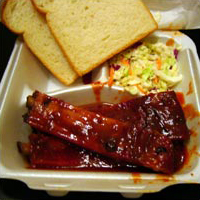