It’s the last day of our trip and we’re both sick of eating out, but we don’t want the awful meal at Le Gavroche to be our last in Vancouver, so we decide to hit Feenie’s for lunch before driving back to Seattle.

Feenie’s is Rob Feenie’s version of a casual bistro and is located right next to LumiÃ¨re. The pricing for Feenie’s is casual, but the decor is anything but. The front room is bright and cheery with an entire wall of orange and brown tone cushions and a furry white chandelier that I covet. The bar is a lovely, seductive red with inset lighting in the ceiling that glows blue. At the very back of the bar is a room with bamboo walls and a sage green bench seat that stretches across the width of the bar.

Ever since my first visit to LumiÃ¨re a few years ago I had been wanting to eat at Feenie’s. At that time they were just starting construction on the new addition, but they were already working out the menu. The waiter told us about how the staff had been taste-testing hot dogs for weeks in order to find the perfect one to serve at Feenie’s. I was so jealous. So of course, I had to order “Feenie’s Weenie” (yes, it actually says that on the menu).

Feenie’s Weenie ($8 CAD) was the best hot dog I’ve ever tasted and as I’m writing this my mouth is watering and I have a desire to skip work and drive up to Canada. It was so flavorful and juicy. It was also filled with delicious cheese and came with the best sauerkraut I’ve ever had. It was served with a cone of perfect fries and a tray of four condiments: chipotle mayo, ketchup, herb mayo and sweet ketchup relish.

Zach ordered the Poutine ($9 CAD), which is apparently a popular Canadian dish and consisted of French fries covered in a rich, rich chicken and veal gravy and cheese “curds” (they looked more like melted mozzarella). It was really good, but it was so rich that an entire meal of just that is a little too much. I would recommend the Poutine only as a side dish to be split, unless of course you are Canadian and are used to eating Poutine.

We also shared a romaine salad with yogurt Caesar dressing ($9 CAD), which was delicious and very light. It was topped with a crisp slice of pancetta and a really beautiful and tasty fresh anchovy.

Our bill came to $26 CAD and we left Canada very, very happy. 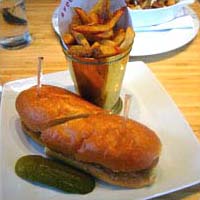 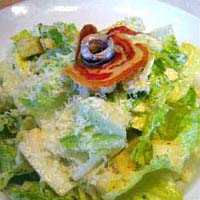 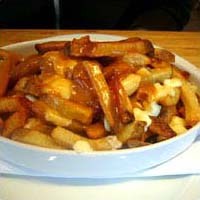