I’m back at it and in force. We started out with breakfast at Cafe Besalu. I had a flaky caramelized onion and gruyere pastry, which was amazing. They know how to pack some serious flavor into a tablespoon of caramelized onion. The pastry was insanely buttery. I ended up trying to eat the thing with a knife and fork because every time I picked it up it slipped out of my hands. Okay, I’m exaggerating. I also split a Pain Au Chocolate with Zach, which had the same delicious pastry but I didn’t like the dark chocolate. I like milk chocolate and Zach thinks that’s wrong.

Zach had the Quiche Lorraine, which is actually the only reason we drove all the way from Capitol Hill to Ballard in the snow (a whole quarter inch, can you believe it?!). I had made a bold statement that I didn’t like quiche and Zach wanted to prove me wrong. And he did. This quiche was so good that it made me sad that the other crap sold in coffee shops is labeled as quiche; that nasty, wet, rubbery stuff gives quiche a bad name. The crust was golden and flaky, the bacon and cheese filling was great, but I couldn’t get over how perfect the egg was—dense, but somehow also light.

After breakfast we wandered around Ballard looking at all the new stores. Zach was devastated to find that Dish Urban Market was no longer, but I pointed out that there was a new cupcake store in its place. Zach kept complaining about Dish and I interrupted, “Did you hear me? CUPCAKES!” I got a mini cupcake, which was a little dry—probably because it was about the size of a quarter, but the icing was good.

Then we headed over to Phinney Ridge to look in the junk stores (I found another elephant egg cup at Antika!). We passed by a Greek deli/cafe on 85th and Greenwood called “Olive You” and I was drawn in by the cases of beautiful seafood and vegetables. I bought containers of marinated mushrooms, giant fava beans in tomato dill sauce, marinated cuttlefish and dolmas. The total came to $25, which at the time seemed really expensive.

We decided to graze for dinner so we hit up Whole Foods for some meat and cheese to accompany our marinated goodies. We got slices of San Daniele Prosciutto, Applegate Farms Sopressata, Smoked Duck and Salmon Lox. We chose three great cheeses: Seal Bay Triple Cream (amazing and salty), Brie de Nangis with Grand Marnier (bright and orange-y) and St. Loup Tomme de Chevre (great mild goat flavor). I grabbed a loaf of rosemary bread and Zach snuck quince paste into the cart.

Everything was delicious, but the stand-outs were the cheeses, marinated mushrooms, fava beans and dolmas. The dolmas were the best I’ve ever tasted—the rice was flavorful and tender and spiked with dried bits of fruit, which lent a slightly sweet taste to the filling. Unfortunately, the owner said that his mom, who is just visiting, makes them. So when she goes back, they may not be available anymore… 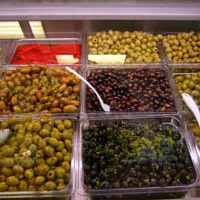 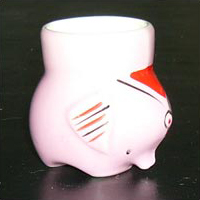 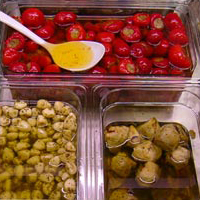 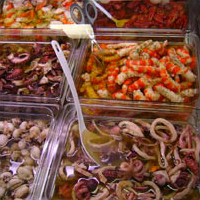