My uncle decided to throw a birthday party for himself this year and wanted to serve Japanese food. It turned into an absolute feast.

When we first arrived, my mom and uncle were in the kitchen preparing all the veggies for tempura and serving up sake. My mom had brought her whole sake cup collection and I gravitated toward the one I remember most from my childhood. When it’s empty it looks like there is a cloudy marble in the bottom, but when you fill it with liquid, you can see that there is a naked Japanese lady in the bottom. My brother and I used to fight over this cup and show it to all our friends when we were kids.

The next course was silken tofu topped with grated ginger, chopped scallions and soy sauce—a favorite of mine. Then miso soup was served. It had a very mild flavor and wasn’t too salty. Then we had a marinated hamachi appetizer that my aunt prepared. It was delicious, but I have no idea what was in it.

Then came platters and platters of tempura. We had cauliflower, Japanese mountain yams, mushrooms, shrimp, carrots and zucchini served with a wonderful dipping sauce with lots of shredded daikon (I need to get the recipe). The tempura batter was light and perfectly crisp. I learned that the secret to a good tempura batter is to use ice water, don’t over mix and make it a really, really thin consistency. My uncle also used a special flour mixture, but wouldn’t tell me what was in it. We ended this course with tempura shrimp heads. The shells were too hard for me to eat, but the legs and inside parts were good.

There were some more courses of sauteed scallops and grilled eggplant, but I was saving room for the sushi.

My uncle had purchased pounds of beautiful sashimi, which were sliced and heaped on platters. We had smoked salmon, ame-ebi (raw shrimp), hamachi (yellowtail), saba (mackerel), maguro (raw tuna), seared tuna, tako (octopus) and ikura (salmon roe). Some people ate the fish as is, but you could also make a hand roll with seaweed, sushi rice, fresh pea shoots, cucumber and shiso.

To finish off the meal, we had green tea ice cream. My aunt’s friend is a green tea ice cream addict and she buys it by the case. She swears up and down that the Dryer’s version is the best. It was very very good, but I was too full to eat very much of it. 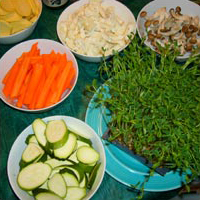 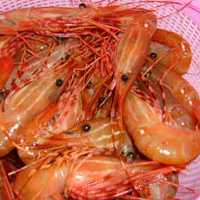 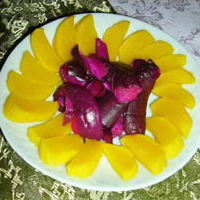 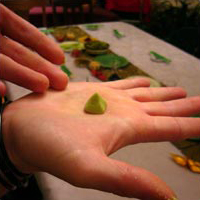 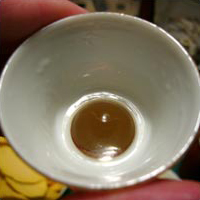 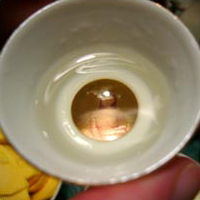 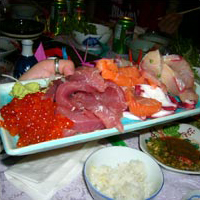 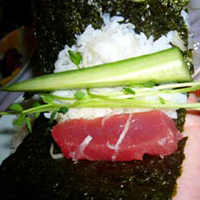 2 thoughts on “Sushi and Tempura Party”