Ever since our trip to Vancouver last week, I haven’t been able to get the Su Dong Wild Boar dish we ate at Wild Rice out of my mind. I did some research and found a recipe at Times Online in the U.K (update: the recipe is no longer online at the UK Times, but you can find it on my recipe website). Apparently Su Dong Po was considered one of the greatest Chinese poets and was a bit of an epicure. It is said that he invented this recipe because of his love of pork—something that we both share.

Once I found the recipe I was determined to make it. I started out by trying to locate skin-on, uncured pork belly (Wild Boar seemed too ambitious for my first go, but next time…). I called both A&J Meats and Don & Joe’s Meats, but they both referred me to Uwajimaya for the pork. I went down and purchased three pounds of it (labeled as rind-on pork side) and was surprised at how cheap it was. I think I paid about $1.50 per pound (Niman Ranch sells it for $4.50 per pound if you’re desperate).

When I got home and opened up the packages, I was delighted by how much it already looked like bacon and had a brief moment where I considered turning it into bacon instead. But I persevered.

I salted it up and let it sit for two hours for a brief cure. Then I boiled it for a few minutes to get the meat scum (i.e. blood albumen) off. Then I rinsed it and started the braise. I used about 1/2 pound more pork belly than the recipe called for and this resulted in not having all the pork fit in a single layer in my oval French oven. In hindsight, this is actually fairly important as having the pork in the liquid for the first two hours of cooking helps to render a lot of the fat.

After the first phase of cooking was done, I cooled the pork and put it in the refrigerator overnight. I think this step shouldn’t be overlooked, because when I put it into the fridge it didn’t seem all that fatty, but when I pulled it out the next day I was surprised that there was a 1/2 inch of creamy white fat coating the entire surface.

When I finished prying off all the cold fat with a fork, I noticed that the “juice” underneath the surface was like Jell-O from all the collagen. The recipe called for straining the juice, but when I tried to remove a piece of the pork, the entire contents of the bowl came out in one solid piece—like a giant, gorgeous meat aspic. So I added the step of re-heating it gently in the microwave to turn it back into liquid form before straining. I was worried about the amount of fat still in the pork, as there were giant striations of fat between the thin layers of meat, so I used my fingers to scoop some of it out.

The pork and the juices went into a makeshift steamer and steamed away for four hours. I can’t even tell you how good my apartment smelled. I was working at home that day, but it was hard to concentrate because I kept day-dreaming of pork. After four hours of steaming, I opened up the package. The pork was swimming in fat and smelled incredible. I tried to gently remove the pieces of pork so I could skim off the fat, but the pork was falling to pieces as I lifted it out. It was the most tender piece of meat I have ever laid eyes on. By the time I got all the pork out, I had caused so much chaos in the bowl that the fat had commingled with the juices again. I absolutely couldn’t wait to eat it, so I proceeded with minimal fat removal, but next time I will either skim before removing the meat or wait for the juices to resettle.

I made a sauce by boiling the juices with a little cornstarch and then pored it over the pork and steamed brown rice. It was truly one of the best things I’ve ever cooked—and possibly ever eaten. The soy marinade just barely flavored the pork giving it a nice salty taste, but the predominant flavor was pure pork. It was still insanely fatty and that took a little getting used to, but it’s also what made it so good and rich; like eating foie gras. Given its richness, I don’t think I could eat this every month, but I’m thinking I’ll be making this at a bare minimum of once a quarter. 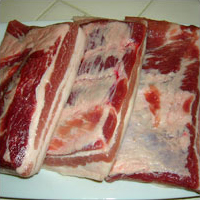 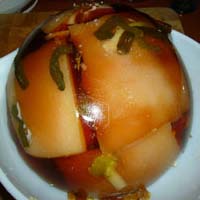 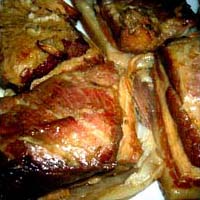 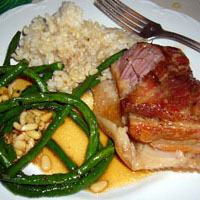 I think this amazing dish should be seen and shared with as many people as possible, so I am submitting it as an entry to MeatHenge’s Meat Platter Contest, even though I suspect that Kitchen Monkey’s beautiful entry will win.