Zach emailed me a few days ago to tell me (okay, brag) that the photographer for See’s Candies was done with the latest catalog shoot and had dropped off all the leftover candy at Zach’s office. He said that there was so much candy that it filled the break room and left only a small path of space from the door to the fridge. Everyone was told to take home several boxes and Zach took a gigantic four-pounder in gold gift wrap that was embossed “The Gift of Elegance”. He brought it to our friends’ joint birthday party that was held at Cafe Septieme.

I really love Cafe Septieme. I think because it’s nearby, dark and smoky, always warm, has red walls and all my friends go there. The food really isn’t fantastic—in fact it can be very spotty (along with the service) but I love it anyway. I also have a secret weapon called the Blue Cheese Bacon Burger. Every time I eat at Septieme, this is what I order and not only is it delicious, but it’s actually the best blue cheese bacon burger I’ve ever had. I’m not sure what they do to it, but it has lots of really creamy blue cheese sauce and crisp, meaty bacon.

At the party Zach broke out the box of candy and there were gasps around the table. You had to use both hands to pass the box, otherwise it would bend under the weight. It really was a beautiful sight and people at other tables were staring with unabashed jealousy. Seeing that much candy available for immediate consumption made me giddy, but I used restraint and only ate a few of my favorites. Plus a log of nougat that was coated in pecans and was about the size of a soda can.

The birthday boy and girl had a great time and are so well-loved that their friends not only took over the entire dining room but, toward the end of the night, ended up spilling into the bar as well. It was a fun party and I met a lot of new, nice people that I will eventually have over for dinner. They will remember me as the girl with the fistful of candy. 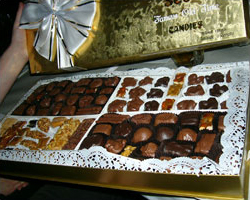