To celebrate Chinese new year, I took Zach out for hot-pot. We were both excited because neither of us had ever tried hot-pot before; my family is Cantonese so we don’t eat much Szechuan cooking (and if we do, we don’t tell my grandma).

A friend of mine told me about a place on 12th and Jackson called Szechuan Cuisine and said it has the best hot-pot in town. I decided that this was the perfect time to try it out, but when we arrived, the place was packed and there were ten people ahead of us waiting for a table. I was too hungry to wait an hour, so we walked across the street and ate at 7 Stars Pepper instead.

We started with the scallion pan cake, which was amazing. Zach likened it to eating really delicious sour cream and onion potato chips, but that description doesn’t do it justice. The pan cakes were crispy, flakey, chewy and came with an incredible dipping sauce. I couldn’t figure out what was in the sauce; it was red in color, but instead of being hot, it was slightly sweet and very addictive.

As we were both hot-pot novices, we decided to try the deluxe hot-pot for $11.99 per person. A portable burner was set on our table and turned on high. A large, divided bowl containing two broths, one plain and one very spicy (way too hot for me), was put on the burner to heat. After the broths were simmering, the waitress came out with a seafood platter containing beautiful, tender raw squid, fish, prawns and fish balls. Then came another plate with thick udon noodles, thin glass noodles, tofu and napa cabbage. Finally came a gorgeous platter piled high with paper-thin sliced raw pork, beef and lamb.

We had no clue what the proper procedure was, so the waitress did a little pantomime for us. We started dropping food into the broths and then fished it out with little wire baskets. We then dipped the food into an accompanying peanut sauce, which was less sweet than a thai peanut sauce and very good. I was shocked at how delicious the whole meal was, especially considering its simplicity.

After I ate the last slice of meat, I realized that I had been having a food blackout. I suddenly looked up and realized that there were other people in the restaurant. I had developed tunnel vision and all I could concentrate on was eating and exclaiming how good it was. Over and over again. Luckily, Zach didn’t mind because he was doing the same thing. 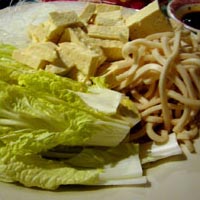 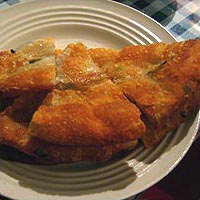 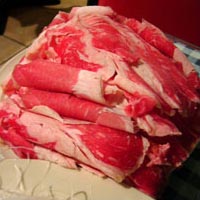 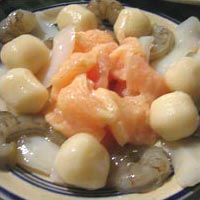