After my first experience eating hot-pot, I was hooked. I wanted to see how difficult it would be to make it at home. I ordered a portable butane burner on eBay for $10 (!), then set about trying to locate a good recipe.

My brother had recently sent me a Sichuan cookbook and real Sichuan peppers from China, and the cookbook happened to have a hot-pot recipe. It sounded a little more involved than the other recipes I’d seen, but it also sounded delicious. I modified the recipe quite a bit as some of the ingredients were hard to find. I also didn’t want a searing hot broth that I wouldn’t be able to enjoy, so I toned down the heat a little.

I also wanted to make an accompanying sauce, since the sauce seems to play a major role in the meal. The recipe in my book called for a simple garlic and oil sauce, but I really wanted a peanut sauce, so I ended up making one from peanut butter, soy sauce, garlic, tomato paste and water. I also made a soy-ginger and a soy-mustard sauce.

I made the broth up to the last step and then brought it over to Zach’s place for the final simmering. I wanted to know how much flavor the Sichuan pepper would add, so I scooped out a cup of broth for comparison before adding the final two ingredients; Sichuan peppers and chili peppers. The broth simmered for another 30 minutes and the difference was amazing. The peppers really balanced out the flavors and helped meld everything together.

When our guests arrived, we turned on the butane burner and set the pot of broth in the middle of the table. Then we brought out two platters of fresh udon noodles, rice stick noodles (soaked in water until soft), fresh shitake mushrooms and chopped napa cabbage. It was pretty impressive already, but then we brought out the platters of raw meat. Oooh! Ahhh! We had Snake River Farms Kurobuta pork belly (yes, I bought it because it looked like bacon), short rib beef, regular beef and lamb. With all that, plus the sauces, we didn’t enough have room on the table so we had to downgrade to smaller dinner plates.

After a brief intro of how to eat hot-pot, everyone dug in. The broth was so rich and good. I could have just drank it for dinner, but with the meats, veggies and noodles it was perfect. Occasionally I’d bite into a Sichuan pepper and the salivating and numbness would set in, but it was definitely better with food than without. By the end of the night my lips and tongue were pleasantly numb.

The sauces were great as well and I liked having a variety. The peanut sauce was rich and luscious, the soy-mustard sauce was spicy and hot and the soy-ginger was light and refreshing—and surprisingly good with the lamb. We bought way too much meat, but no one stopped eating until the last morsel was gone.

For dessert, we had mango jello from a box. We found it at Uwajimaya and it looked interesting. And it tasted interesting—a cross between pudding and Jell-O. I didn’t care for the texture or the fruity and fragrant taste, but some people claimed it was “odd, yet delicious”. 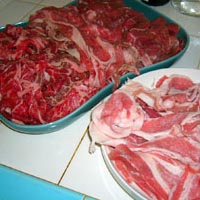 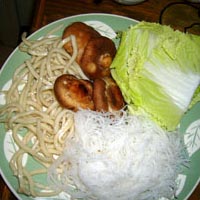 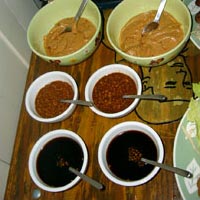 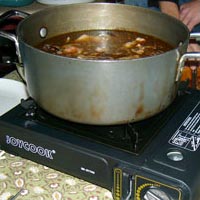