I was invited to my first ever Oscar party this Sunday and was very, very excited—not to watch the Oscars, but to go over to my friends’ house and eat really delicious food. My friends G & J are both great cooks with extreme opposite cooking styles. G is like me. He likes to cook by the book, or at least within the framework of some sort of recipe. But J… if you knew J, you’d know that his cooking style matches his personality; very creative. It’s great to watch them in the kitchen together. Their cooking styles really complement each other and they turn out some fantastic food.

I should take a moment to say that while I do see the occasional movie in the theater, I prefer Netflix. So before heading over, I decided to find out what movies and people were in the running so I didn’t sound like a total idiot. I was shocked to find that I had only seen two movies from the entire list—and they were nominated for something like sound mixing. Uhhh.

When we arrived at the party, the Oscars were already in full swing. I was only vaguely paying attention to the television—mostly to see when the commercials were on so I could get up and graze on the appetizers without blocking anyone’s view. I had brought some nice cheeses and smoked white King salmon. K had brought pita chips, which I found to be dangerously addictive. S had made a really delicious smoked salmon spread with cream cheese and green onions. Very simple, but very good.

I got in trouble for rooting against the Aviator. I don’t like Leonardo all that much and thought that the Titanic Oscar sweep a few years ago was ridiculous. So I was feeling bitter. And justified in my bitterness. But I finally had to shut up when S pointedly told me that I hadn’t even seen the Aviator.

After the Oscars were over, we feasted. G had made a fantastic chicken saltimbocca. The chicken was perfectly cooked and napped in a rich and salty mushroom sauce. J had made a crazy cabbage, cauliflower and gorgonzola salad that was presented (beautifully) in a hollowed out Savoy cabbage. They had also made a zucchini dish, shredding the zucchini into thin strips with their new mandolin so it looked like spaghetti. I think that’s my favorite way to eat zucchini. There was also a really good spinach salad with some of the tastiest blood oranges I’ve had in a while.

I am hoping for many future invites to Oscar parties. Next time I might even see the movies. 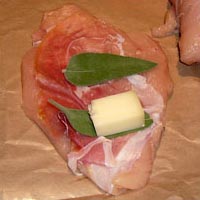 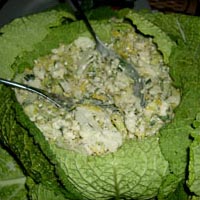