Even though I wasn’t wild about eating guanciale plain, I figured it must have some redeeming qualities as an ingredient. I went searching for a recipe and found that guanciale was put on this earth to be made into Bucatini all’Amatriciana (named after the Italian town of Amatrice).

I was really excited about the recipe because bucatini is one of my all-time favorite pastas. It’s shaped like spaghetti, but thicker and hollow. I love it because it’s chewy and holds sauces really well. I called Zach and told him to pick up a box of bucatini from DeLaurenti and I’d be over after work to cook dinner.

I generally don’t like cooking in other people’s kitchens as I’m particular about equipment. While Zach had all the pots and pans we needed for dinner, I realized what a difference it makes when cooking with tools you love. (I also think that maybe people who claim they don’t like to cook have only cooked with crappy equipment.) I found myself staring wistfully into the utensil drawer. There were many spoons and spatulas available, but not a single one called out to me. They were all too large and made of cheap plastic. When I held the spoon in my hand it seemed off proportion. Tools like these I tend to leave in the pan or too close to the burner in hopes that they’ll burn and need replacement.

Despite my lack of enthusiasm for cooking that day, I turned out an incredible bowl of pasta. Although, I have to admit that the guanciale did most of the work. In the pasta dish the guanciale was turned in to something sublime. It was still salty and fatty, but when mixed with the starchy pasta and spicy tomato sauce, it seemed to have found the perfect companions to bring out its true nature. Every time I had a bite that included guanciale I would shout out “YUM!” in disbelief. I was astounded that a hunk of meat could make a simple pasta dish so incredible. 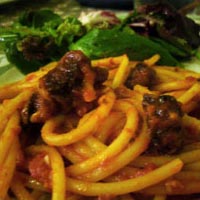