When I’m craving fried chicken, I head down to Ezell’s Famous Chicken. A few of my friends were also craving fried chicken, so we decided to make an outing of it. While waiting for my friends to show up, I ran into my neighbor, M. M said she had just been to Ezell’s and will never go back. That was pretty shocking, so I asked her why but it had more to do with an inability to stop eating the chicken than the chicken being unpalatable.

M and I caught up for a while and she showed me her recently published article in Alaska Magazine. It was a hilarious and true story about a live salmon falling from the sky (an eagle had dropped it), retrieving it (still alive, despite the fall) and then rushing home to grill it up. I wish I had stories like that.

While Ezell’s Fried Chicken doesn’t fall from the sky (damn!), I am glad it’s only a three minute drive from my house. Ezell’s on 23rd only does take out, which makes me feel sorry for people that live far away. Driving home, we had to put the chicken in the trunk so that we wouldn’t leave grease stains on the upholstery. But when we got home, we pretty much tore into it.

We had the spicy chicken, which I prefer to the plain chicken. It has this incredible, thick, crunchy crust that’s very assertive and doesn’t let you forget it. I would be happy to just eat the crust, but thankfully the meat part is good too. Moist, salty and juicy—although a few of the breast pieces were a touch dry. Actually they weren’t really dry as much as the dark meat was just incredibly succulent by comparison.

We also had sides of biscuits, coleslaw and beans. I normally like vinegar-based coleslaw, but Ezell’s mayonnaise-y one was perfect with the chicken and I liked that it was still nicely crisp despite the mayo bath. And the beans. I love their beans; really sweet and ketchup-y. Perfect for dipping your chicken into. 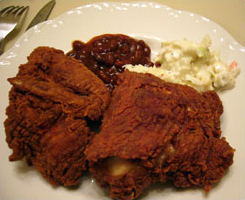