It’s been way too long since my last visit to Salumi, so I set a date with K to pick me up from work and go for a long lunch. The last time we tried this, Salumi had been closed for vacation. We were so disappointed! But it made this trip even more anticipated…

As we approached Salumi, we saw that not only were they open, but there was a line snaking its way almost out the door. Normally, this would make me impatient, but at Salumi you need at least five minutes to read through the beautiful menu and another five to figure out what you want.

I settled on the porchetta sandwich and K got the lamb prosciutto sandwich. Since my visits seem to be few and far between, I also decided to get some cured meats to take home. I really wanted the Finocchiona salami (it’s addictive—even more so than salami should be), but they were sold out. I got the Mole salami instead. I also wanted some pancetta, but again, sold out. We asked about the Guanciale (gwan-CHA-lee) and when he said it was pork jowl bacon I nearly burst into tears. I purchased a big hunk.

By the time we got our sandwiches and paid, a few seats at the communal table in the back had opened up. We sat down and ogled our sandwiches. Actually the whole table ogled them and asked us what we had ordered. I got out my camera and the couple across the table asked if we were tourists. I sheepishly shook my head and tried to explain about my obsession with food and my blog, but most people don’t get it.

As I took my first bite of the porchetta sandwich, I felt a rivulet of juice run down my cheek. I looked at the plate and realized that my sandwich was soaking in a puddle of pork grease. Gross you say? But this was the best pork grease I’ve ever tasted! The hunks of pork were tender and flavored with garlic and onions. The vinegary, stewed peppers were a perfect counterpoint to the richness of the pork. The normally hard sandwich roll was soft and heavy with pork juices. The sandwich was messy and falling apart as I ate it, but I was in heaven. If I could purr, that’s what I would be doing.

Halfway through K and I switched sandwiches so I got to try the Lamb Prosciutto. I was expecting something mild and delicate like regular prosciutto, but this was quite the opposite. It was bursting with lamb flavor, almost like it was lamb concentrate. It came on a giant roll—so giant that I had to take the top off and eat it like an open faced sandwich. It was robust and chewy. The rich lamb flavors meeting the tang of provolone. Delicious.

I may need to find a new job. One that’s closer to Salumi. So that I can go there everyday for lunch. 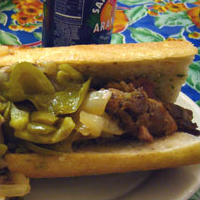 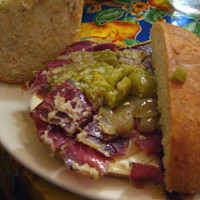 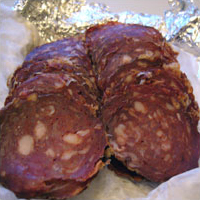 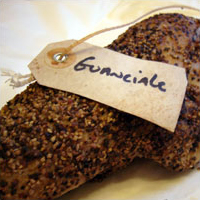