I finally caved in and decided to make the bacon tempura recipe that was in the latest issue of Saveur. The recipe sounded a little iffy, so I got cheap, Farmland bacon for the first test.

I fried the bacon until it was almost, but not quite crisp, then dipped each slice into tempura batter and fried until golden. I tasted. It was shatteringly crisp and good. I was surprised that it didn’t taste much like bacon at all. Or it tasted like bacon, but without all the salt—for some reason frying leaches out the saltiness. I thought the recipe was nuts because it called for the bacon to be salted after frying, but it truly did need it.

Now that I knew it tasted good, I decided to try it with nicer bacon. I pulled out the slab of wild boar bacon I bought yesterday and sliced it fairly thick. I fried it up, keeping a few pieces in the pan longer so that I could try the bacon plain. For some reason, when it’s frying it smells like ironing…

Wild boar bacon rocks. In fact, it’s the best bacon I’ve ever tasted. Ever. It’s really meaty and lightly smoked so that you can really taste the flavor of the boar. I wanted to eat all the bacon as is, but I managed to save a few slices for the tempura. It was good in the tempura, but it masked the flavor. I would recommend using non-fancy bacon for bacon tempura, but I liked the contrast of the thick-cut and thin-cut. 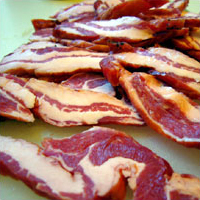 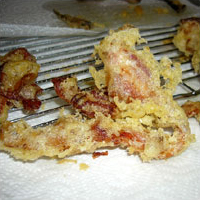