On our second day in Newport, we woke up to unexpectedly glorious weather—one of those days where it’s hot out before 9am. I had seen crab rentals in the lobby and decided that today was the day I’d catch my first crab.

I didn’t have the first clue about crabbing. I assumed we’d rent a crab ring in the morning, toss it into the water, go play and check on it the next day. The woman at the rental counter laughed and said if we did that we wouldn’t catch any crabs. I was confused—didn’t the crabs just walk into the trap and not come out? I had heard tales of crustacean cannibalism… maybe the crabs ate each other if they spent too much time in a confined area. Or maybe someone would steal our crabs if we left the ring unattended? We decided to check out the town first and then come back and spend the rest of the day crabbing.

We drove through Newport’s main street; it was touristy, as predicted, but also kind of cute and the perfect place for a family with young kids. We drove a little further and ended up on Historic Nye Beach. It was breathtaking… in more ways than one. The beach was unbelievably beautiful, but it also was unbelievably smelly. There were thousands of tiny, bright purple jellyfish washed up on the beach and rotting in the sun. When a jelly completely dried up it left behind a hard little disk, about the size of a half-dollar, and it looked like a translucent computer chip. I was fascinated with the jellyfish, but they smelled so bad that we had to leave.

On our way back we drove through the town of Nye Beach, which was the exact opposite of Newport’s tourist strip; upscale and understated. It was weird how different each area was, considering they’re less than a mile apart. In Nye Beach we stopped at the cutest little deli (Village Market & Deli) and purchased some delicious provolone and hard salami for lunch.

When we got back to the hotel, we changed into more appropriate crabbing attire and headed back down to the rental desk. I asked a million questions and finally figured out that the crab ring lies flat on the bottom of the water, so the crabs can walk in. Then when the ring is pulled to the surface, it forms a basket that catches the crabs. A crab ring is rented for a period of 24 hours ($8) and you can crab for as long as you want within that time period. The ring rental came with a large bucket and a green plastic ruler for measuring the crabs. We also had to purchase two crabbing licenses ($6.50 each) and I bought a pair of plastic coated gloves ($3) that I figured would come in handy. Now all we needed was bait. The brochure I picked up said that the bait should be as smelly as possible: our choices were chicken or mink. I assumed the mink would smell more than the chicken (an understatement), so we purchase a frozen mink (sans head, tail or feet) for $2.50. I calculated that we’d need to catch at least three crabs in order to break even since I had seen $9 fresh crabs for sale in town.

We headed out to the hotel’s private dock with our crabbing supplies, a bag of sour cream and onion potato chips and a few Rainers. I still wasn’t exactly sure what we were doing, but there was no one else on the dock to pepper with questions; we had to wing it. The first step was baiting our trap. I unwrapped the mink and was hit with a putrid smell—despite being frozen. Between one frozen mink and thousands of rotting jellyfish, the jellyfish are surprisingly better smelling. I was hoping I could get away with not touching the mink, but I couldn’t grip the string with the gloves. Holding my breath, I tied the mink to the bottom of the trap as quickly as I could. It ended up looking exactly like a giant, trussed pork loin.

We lowered the ring into the water, popped open our beers and discussed strategy. K wouldn’t touch the crabs, so we decided that she would pull up the ring and I would grab the crabs. And safety first; if K got nervous she was to ditch the ring back into the water. K asked what we’d do with the crabs that were under the allowed size of 5.75 inches. I said I’d gently place them in the water and they’d float back down to their home.

We were anxious and didn’t have a watch to tell if the recommended 20 minutes had passed (I’m pretty sure it was only 5), so we decided to pull up the ring and see what we had caught. K cautiously pulled up the net while I took pictures. I was thrilled to see that there were about six crabs in our net! Most of them were under the required size—so small that they could crawl through the net and onto the dock. We didn’t account for this in our strategy, so some excitement ensued. I ended up running around the ring, herding the escaped crabs back into the water while K screamed and pointed when they got loose. Finally we were left with one, giant crab. Just as I was getting ready to put it into our bucket, we remembered that we had to check the sex (you’re only allowed to keep male crabs). I flipped it over and was crushed to find it was a female. Before putting it back in the water, I wanted a picture of me holding my first crab. K was getting the camera when I felt a hard pinch through the gloves. I screamed at the top of my lungs and hurled the crab back into the water, screaming “It BIT me! That f*cker BIT me!” while K laughed. Our first pull was a bust, so we lowered the crab ring back into the water.

Each subsequent pull yielded many more little crabs, but also a few male ones that were large enough to keep. We learned that tossing the ring as far out as we could returned better crabs. I also learned that gently placing the crabs back in the water is neither wise nor practical. I quickly realized how vicious and strong crabs are and I ended up throwing them off the dock as quickly as I could. One crab was holding on so tightly that I couldn’t get him to budge. I was pulling on him as hard as I could while Kelly tried to saw off the piece of mink he was clutching with the ruler (didn’t work).

On the fifth or sixth pull, K pointedly informed me that she couldn’t do this anymore. I was confused since she seemed to be holding up pretty well. Finally she pointed at the mink. Oh. The crabs had gotten to the mink insides. I told her not to look and that I’d take care of it. Ahem. Could I really do this? Our mink meat was about a foot and a half long and at least two feet of intestines were hanging out. All I needed to do was pull the guts out and get rid of them so it didn’t look so gruesome. I pulled. And pulled—all the while screaming at K not to look. She’d die if she saw what I was seeing.

I don’t think degutting an animal can be compared to anything else in life. The best I can say is that it was like pulling a tissue out of a brand-new Kleenex box. I mean, there’s not much resistance, but you do have to tug a little and the sound is not so pretty. I was losing my nerve, but I figured if I didn’t do this, K couldn’t go on—and she was already being an incredible sport considering she’s doesn’t even eat seafood. I kept screaming at K not to look as I yanked and yanked. About five feet of intestines came out and with one last tug, came free. Whew! Then I realized the guts were entwined in the net. “Don’t look!” I screamed. I was slightly hysterical at this point, partly because I was feeling queasy and partly because I thought it was hilarious that we were making such an incredible scene.

After a brief struggle, I got the intestines unwound from the net and tossed them into the water. “I got it! I got it! Oh, NOOOOO! Wait… don’t look… uh… we have a problem…” I’m practically doubled over with laughter at this point. “F*ck! The guts FLOAT… don’t look!” I was trying to figure out how to make the intestines sink when an entire flock of seagulls swooped down on me. I hit the deck and covered my head for protection. I was combination screaming, crying and laughing “Oh my god! Oh my god! Oh my god!” while two gulls grabbed the entrails on each side and I watched a horrifying and much less romantic version of the lady and the tramp spaghetti scene. I almost lost my lunch, but at least the entrails were finally gone.

We stayed out for almost three hours and caught six crabs total; three Dungeness and three Red Rock. The Red Rock crabs were a beautiful dark reddish color with bright purple highlights on their claws. The Dungeness just looked yummy. We fired up the crab pots located on the upper deck and relaxed in the sun with another well-deserved beer. Once our crabs were cooked and bright red, I covered them with ice and brought them back to our room. I shelled for about three hours that night and ended up with about 2 cups of crab meat. I melted a 1/4 stick of butter and dug in. It was the sweetest crab I’ve ever eaten. 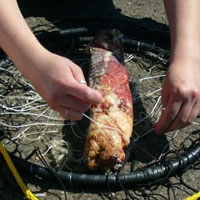 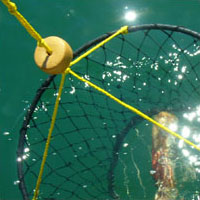 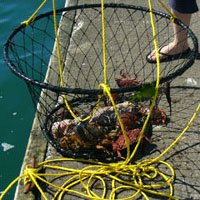 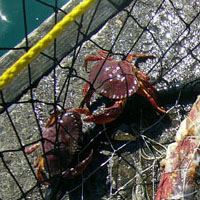 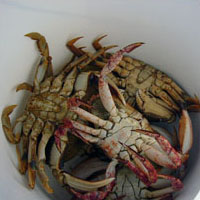 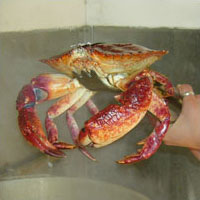 When I got home and figured out what a mink was, I was horrified. They are ridiculously cute. When I found out they purr when they’re happy, I felt as if I’d just used a cat as bait. Will this be the simultaneous beginning and end of my crabbing days?