After spending $19.95 on the Five-Spice Crispy Duck at Typhoon, I decided that there’s got to be a cheaper way to get crispy duck into my mouth.

A few years back I had the bright idea to roast my own Peking duck. I did the whole bit, from steaming it to render the fat, then air drying it in the fridge to crisp the skin, then roasting it to golden perfection. It turned out great but the entire duck ended up serving 1-2 people, when I had intended to serve it as a main course for four. I actually had to order chow-mein from the local Chinese restaurant to serve my guests, while the duck ended up as an expensive and time-consuming garnish for the salad. After that fiasco, I swore I would never cook another duck.

On that note, I headed down to the ID and bought a whole duck at King’s Barbecue House (plus a pound of Cha Shu because it looked so amazing). At Uwajimaya, I picked up the pancake buns, cilantro, jalapeÃ±os, plum sauce and an assortment of pickled dishes and seaweed salads. When I got to my friend’s house, I heated the pancakes in the microwave (per the instructions) and set out the meats and condiments. I mixed the plum sauce with a bit of the duck juices and we were ready to eat.

The duck was good but not fantastic, and something weird happened to the pancakes when microwaved: they turned into rock hard biscuits. So my first try of Duck Pancakes at Home didn’t go so well. However, the next day I heated the left-over buns in a steamer and they turned into the pillowy, soft buns I know and love. Plus I found a better source for BBQ duck at Sun Ya. So next time I’m convinced it will be just as good as Typhoon. 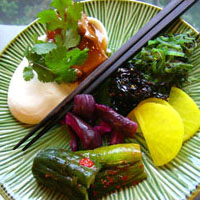