My dad was in town this weekend and whenever he visits we have a ritual of eating out and then playing some pool at Temple Billiards. On his last two visits we ate at Lark and Union, so this visit I wanted to take him somewhere less pricey, but equally delicious. I was trying to decide between Malaysian and Chinese, when he told me he wanted to go to Ivar’s. For some inexplicable reason, my Dad loves Ivar’s fish and chips. Don’t get me wrong, their fish and chips are tasty, but of all the things one could miss about the Seattle food scene, Ivar’s fish and chips wouldn’t make it on my top ten. Not even close.

So I was all prepared to go to Ivar’s, but before I picked him up at my grandma’s house, my aunt called and asked me to get some food for my grandma on the way over. I stopped at Malay Satay Hut and loaded up on curries, veggie dishes and roti. By the time I got to the house the smell was permeating the car and I was craving Malaysian food in a bad way. I told my dad he had to at least try a bite of the Roti Canai. He did and when we left for our dinner date, we headed straight back to Malay Satay Hut.

We started out the meal with the Roti Canai, which is this amazing flatbread served with curry. It’s like taking the best of both worlds from naan and scallion pancakes. The barely sweet roti was flaky, soft and slightly chewy.

Next we had the Yam Pot with Chicken. I wasn’t expecting too much from this dish because in the picture it looked like mostly vegetables (yep, they have PICTURES on the menu!), but I was pleasantly surprised by the depth of flavor. The tender morsels of chicken were honestly some of the best I’ve ever had. Plus it came in a delicious deep fried bowl made out of “yams”. (The menu says it’s yam, but I swear it’s taro.)

We also ordered the Lamb Curry—there are two kinds of curry on the menu, one with potatoes and one without. I like the one without as it’s drier and has a more concentrated flavor. I’ve never had curried lamb before; it’s very very good.

Next came the Whole Fried Fish, which I love and order every time I’m at Malay Satay Hut. It’s an entire fish, deep-fried until golden brown and served with an incredible sweet and tangy sauce. (I think it’s made from tamarind.) Unfortunately, this time the fish was overcooked and a bit dry.

Our last dish was from the specials board: Guinness Stout Short Ribs. They were dark, dark brown meat nuggets with a sticky, sweet glaze and I ate them like they were candy. 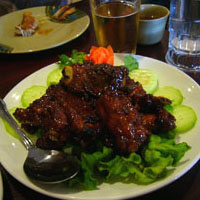 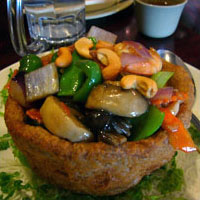