Minutes after reading MeatHenge‘s porn-like prose about his High Roast Danish Viking-Smoked Sea Salt Chicken Stuffed with Bacon, I found myself at the Salt Traders website buying a sample jar of Danish Viking-Smoked Salt. Several days later my salt arrived in the mail and I rushed to the store to buy a chicken.

I love roast chicken, but am a huge fan of the brining and butterflying method; it produces a juicier and more evenly cooked bird. I followed my recipe but cut down on the brining salt by half since I would be salting it further with my fancy new salt. Once my bird was brined, I cut some thin slices of wild boar bacon and slid them between the skin and the breast meat of the chicken. I opened up the Danish Viking-Smoked Salt and it released a heady aroma; a pungent smell of smoke similar to what your clothes smell like after spending a night by the campfire. I tasted a crystal and boy was it strong! Following MeatHenge’s advice, I pounded the salt with some pepper for a finer texture and oiled the bird before applying—it worked like magic and the salt clung to the skin.

After about 45 minutes in the oven my bird was done and I pulled it out. The skin didn’t crisp up as much as I had wanted, but that was because I was being impatient and didn’t give the skin enough time to thoroughly dry. I had thought about bringing out the fan, but I opted for laziness. The bacon didn’t crisp at all, since it was under the skin it cooked with a moist heat. It was soggy and limp, but it tasted FANTASTIC! The chicken was perfectly cooked and so moist. The flavor was deliciously salty and smoky. Mmmmmm! Thanks MeatHenge! 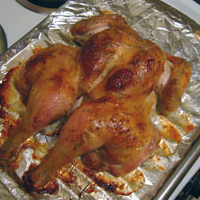