The other day I was exploring the always lovely A Hamburger Today site and came across Adam’s post on making White Castle burgers. I thought it was absolutely hilarious and incredibly dedicated of him to make them at home. I’d never had a White Castle burger before and decided it was high time I figured out why people go nuts for them.

I followed the same recipe Adam used, with the glaring omission of the baby food. I just couldn’t go there. I mashed up my meat with the beef broth until it was almost soupy (p.s. it smelled really gross). I spread the beef mixture out on a tray, scored it and froze it. Adam said punching the trademark holes was optional, but I wanted the real thing, so I painstakingly punched out holes in the meat. After the final freezing, I separated my patties and thought they looked pretty good.

I soaked the dried onions in water (smelled extra gross) and fried up some wild boar bacon (covered up the yucky smells). Once the onions were, uh, “rehydrated”, I put them in a pan and fried them up with the burgers. I was intending to cook them just on one side, as true White Castle burgers are cooked, but it became apparent that if I didn’t flip them, I’d either end up with raw burgers or rubbery, over-cooked burgers. After the patties were cooked through, they neither looked nor smelled very appetizing.

I used cut up hot dog buns, on which I placed a single patty, a spoonful of “onions” and a dollop of ketchup. I ate it in about three bites. It was better than I expected, but it didn’t wow me. On slider number two, I added a slice of melted cheese and wild boar bacon. Better, but the strong “onion” taste overwhelmed the bacon—and it was still missing something. On the third try, I added a dab of mayo, a slice of unmelted cheese and salt. The salt was key and finally I understood why people love these burgers, in a closeted, guilty pleasure kind of way. I ended up eating quite a few. 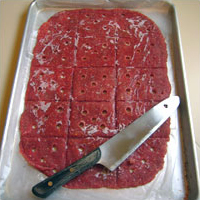 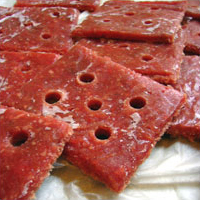 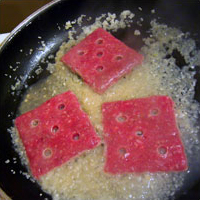 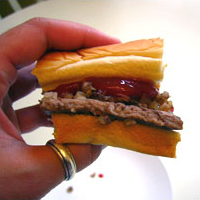 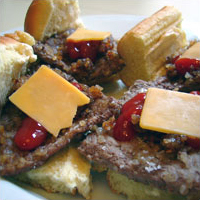 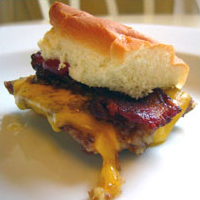 Overall, it was a fun experience to make these, but it was pretty time consuming—and I’m not sure if they’re worth the effort. Maybe if you didn’t punch all the holes. I don’t know what real White Castle burgers taste like so I can’t really compare; maybe the baby food I left out really is the secret to making them outstanding… (shudder)