A few weeks ago I attended the Ballard Seafood Festival for the first time. Until my friend K told me about it earlier this year, I never even knew it existed. I’m one of those people who hears the word “festival” or “fair” and runs the other way. I’m not a crowd person. In fact, I haven’t attended a Bite of Seattle in something like fifteen years.

Unfortunately we got there (seconds) too late and the lutefisk eating contest was over—who knew it would only last fifteen minutes? We were disappointed but hungry, so we turned our attention to the food. The weather was ridiculously hot that day so our group decided to get food and bring it into the beer garden, with its tented tables and mercifully cool misting system (which I now want to install in my apartment). This is what we sampled:

Sofrito Rico
http://www.sofritorico.com
Tostones with garlic sauce – The tostones didn’t hold up very well under the heat and were slightly wilted. They didn’t compare to the first time we had them, but the garlic sauce was strong as ever and delicious.

Bavarian Restaurant
The Bavarian bratwurst made me very, very happy (surprise, surprise). We had two kinds: beef and pork. Both were smothered with hot-off-the-griddle onions and sauerkraut. The sausages were amazing. Oddly enough, I preferred the beef one to the pork.

Kaleenka Piroshky
Piroshky are perfect fair food—hand-held, delicious pockets of dough stuffed with savory fillings. We had one with salmon and cream cheese, which was surprisingly good with lots of dill and a good salmon flavor. The second piroshky we sampled was stuffed with ground beef and cheese. Mmmm. Cheesy, burger goodness in a sealed bun.

Gyros! Gyros! Gyros!
This was one of the better lamb gyros I’ve ever had. Perfectly cooked, flavorful lamb on soft, soft pita with a great tzatziki sauce.

The Hi-Life
http://www.chowfoods.com/hilife
The Hi-Life had an impressive grill going and were cooking up shrimp and chorizo skewers on pita with romesco sauce. This was by far the worst food we ate and the only disappointment of the day. The pita bread was insultingly stale and the romesco sauce, normally pungent with garlic, tasted like it was made from soggy cardboard.

Ballard Chamber of Commerce’s Alder-Smoked Salmon Barbecue
This was a big cook-out in the corner of the festival. We split a salmon dinner plate that came with alderwood smoked salmon, coleslaw and a slice of bread. The salmon was tender and flaky with a wonderful alderwood flavor. Paired with the sweet and creamy coleslaw, it was near perfect.

We ate our food and had a few beers, but were melting in the sun. To stave off heat stroke, we headed to the People’s Pub which advertised air conditioning. I ordered a deep fried pickle, because I have always wanted to try one. I think this is one of those things you either find delicious or disgusting. I thought it was highly unusual and had a bit of a disconnect eating a hot pickle, but it was very good.

I may have to revise my opinion about festivals; it’s a lot of fun to sample so much food in one day! 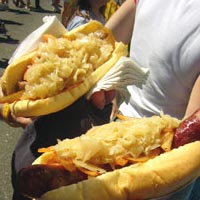 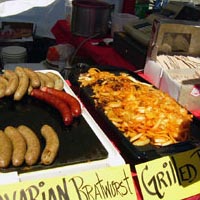 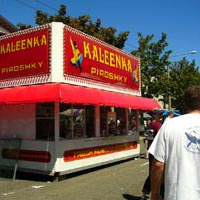 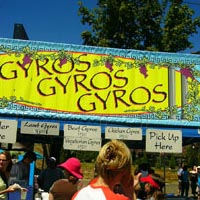 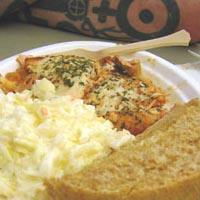 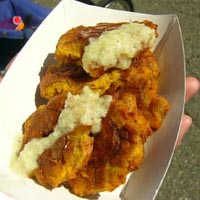 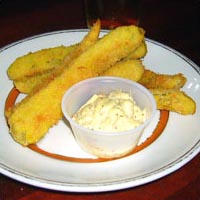 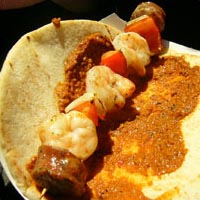