“Leftovers” is such an unappealing word; it leaves an impression of undesirable, unwanted food. So when I invited my brother over for leftovers, I don’t think he had any lofty expectations. Of course when he found out the leftovers consisted of the pork I Doufeu’d (yes, I’m inventing new words) last Sunday, he was pretty excited. He made a comment about my leftovers being better than most restaurant food, which made me smile. I love my brother. He knows how to butter a sister up.

I gently reheated the roast in its tea sauce and the pork managed to become even more tender and succulent—a thing I wouldn’t have expected to be possible. To accompany the pork, I cooked some fresh, young green beans and slathered on a bit of butter and a beautiful herbed salt from Salt Traders. I also made a package of tarhonya which I had purchased from PFI a while back.

Tarhonya is a Hungarian pasta made from flour, eggs, salt and water. It’s shaped like tiny hard nuggets of barley and is an odd, not-quite-found-in-nature yellow. After some research, I discovered it’s best to brown the nuggets in butter or lard and then add broth to finishing cooking—kind of like a rice pilaf.

I browned the tarhonya in duck fat and then added chicken stock. I was worried that the pasta would get too mushy so I only cooked it for about twenty minutes. Unfortunately, it wasn’t nearly long enough because some of the nuggets were still hard and crunchy. It was good, but I think with an additional ten minutes of cooking, tarhonya might turn out to be my favorite pasta. 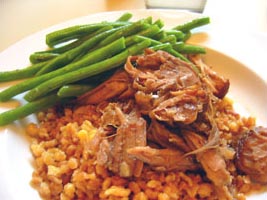