I finally made my first trip to Campagne. It was my birthday and I was torn between eating at one of my favorite restaurants or trying someplace new. In an effort to not write about the same five restaurants, over and over again, I’ve been trying to branch out and be adventurous—so Campagne won out.

It was a beautiful day, by Seattle standards, so we opted to sit outside in the courtyard patio. We started off with a round of cocktails and a small plate of gougeres. I was surprised that the gougeres were served cold, and was equally surprised that they tasted really good cold. They were airy and perfectly puffed and had an intense gruyere flavor.

Per usual, we ordered a ridiculous amount of food but I wanted to try a variety of things to get a feel for the menu. Our first appetizer was Oeuf et Saumon Fumet ($14), which was described as a “soft cooked Araucana egg in aspic with smoked salmon, wild salmon caviar, creme fraiche and brioche”. When it came to the table I just about died. It was flat out gorgeous; a perfectly cooked egg encased in a quivering, vibrant yellow aspic. What a devastating disappointment to find that the aspic was entirely for show and void of flavor. The creme fraiche was frothed until light and airy, which was pretty, but tasteless. The only flavor on the plate came from the small portion of luscious smoked salmon, the salty caviar eggs and caper berries. It was like going on a date with a really, really hot guy, then discovering he’s more boring than watching paint dry.

Our next course was Tartare de Boeuf ($10 for the small portion). This was a “raw hand-diced rib-eye with sweet onions, capers, Dijon mustard, raw egg yolk and herbs served with arugula, parmesan and pommes frites a la canard”. First off, I love beef almost as much as I love pork. And the mention of potatoes and duck fat in the same sentence makes me swoon. Needless to say, I was positive that I would love this dish. When the plate came it was, again, a beautiful presentation. The golden fries were perfect, identical rectangles stacked in log cabin formation, but when I bit into them they were soggy, starchy and tasteless. The side of arugula was overdressed and oily. The tender beef was formed into beautiful quenelles, but tasted bland despite the addition of capers and onions. At this point I was starting to question whether or not it was me. Did my taste buds pack up and leave on vacation without telling me?

The last appetizer, Assiette de Charcuterie ($13) was the saving grace. It was an assortment of pates and meats “served with cornichons, Dijon and stone-ground mustards, and house-made pickled vegetables”. The country-style pork and chicken liver pate was rich with a strong and pure liver taste. The veal tongue was incredibly tender and packed with beef flavor; this was what I wanted the beef tartare to taste like. My favorite was the duck and rabbit rillettes. It had great texture and consistency with a solid duck taste that wasn’t over-the-top liver-y and it was almost sweet… maybe a touch of Cognac? The small scatter of fleur de sel on the plate was all the accompaniment it needed.

For dinner, S ordered the Ris de Veau ($27), “roasted veal sweetbreads on house-made spinach noodles with crispy pancetta”. I personally have a hard time with sweetbreads. It’s not the taste, but rather the chalky texture combined with the oily aftertaste that coats your teeth and tongue. That being said, if I was a fan of sweetbreads, I would have loved this dish. The generous lobe of sweetbreads was nicely browned and accompanied by tender, heavenly spinach noodles in a light cream sauce with generous hunks of crisp, salty pancetta.

I ordered the Cailles aux Feuilles de Vigne ($23), “grilled bacon and grape leaf wrapped quail with roasted black mission figs and red wine-port glaze”. When I first saw my plate I burst out laughing. The odd way it was plated made the two quail look like they were having sex; stacked one on top of the other with the bottom quail’s legs askew. At first I didn’t like this dish. It tasted under seasoned and the glaze was greasy and watered down—not at all like the rich, flavorful sauces I’ve come to expect from French cooking. The dish grew on me after several bites, but it never managed to blow me away.

My favorite plate of the night ended up being the Assiette de Fromage ($12). Someone in the kitchen really knows their cheese. It was a well thought-out and enjoyable assortment of cheese—all were paired well, perfectly ripe, and delicious. We had a luscious Pierre Robert triple cream (cow), Mimolettevielle cheddar (cow), Idiazabul (sheep), Tome St. Loup (goat) and Persille de Beaujolais, which was a pungent blue (cow). We also shared a delicious Tarte aux Peches ($8) dessert. It had a nice crust and great peach flavor accompanied by a compote of perfectly ripe strawberries, raspberries and blueberries. And cardamom ice cream to die for.

Overall, it was a very pleasant evening. The waitstaff was professional and attentive. The open-air courtyard felt romantic and summery (and very un-Seattle-like). I really wanted to love Campagne, but too many of the dishes left me wanting. The value was a bit skewed in the wrong direction; so for what we got, it seemed pricey. If I’m going to pay that much for a meal, I want it to wow me. Is that too much to ask? 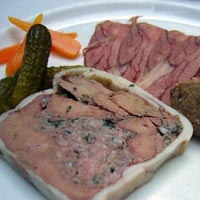 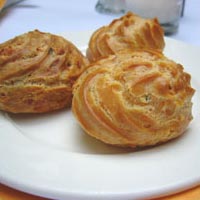 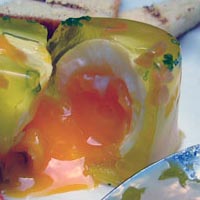 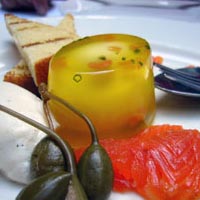 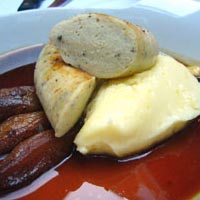 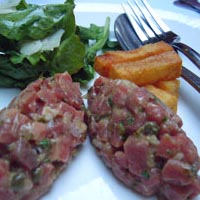 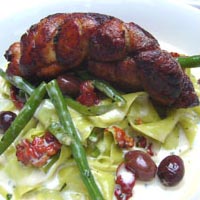 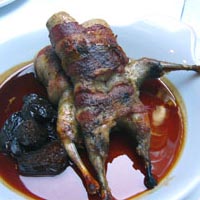 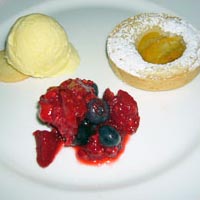 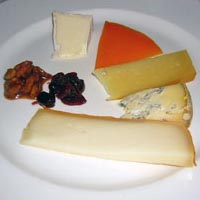