The Sunset Supper at the Market is an annual fundraising event for the Market Foundation which takes place in the Pike Place Market. It was my first time attending an event here and I wasn’t quite sure what to expect. The main street was closed off to car traffic and was filled with restaurant vendors, tables and a stage.

The gates opened at 7pm and we were there by 6pm, but there was already a line of at least sixty people. My astute friend noticed there was a second entrance listed on the map. We took a chance and walked down to find that there were only five people waiting in that line. Score!

When the gates opened we got our little plates and started meandering through the booths. At first there weren’t too many people around and we loaded up on food and found an area to stand while we sampled the food. Our second round of foraging fared much worse. By this time there was a sea of people and we were standing in lines for ten to fifteen minutes just to get a sample bite of something. Luckily after round two we were pretty full so we found a spot to sit and listen to the band.

About an hour or so before the event ended we decided to check out the desserts. This was probably the best part because almost everyone had left at this point, so we were able to sneak into the reserved seating areas and sit down with our desserts.

I think there were about seventy food and drink vendors, but we only made it to the following:

Canlis / Canlis Salad – Romaine, bacon, Myzithra and Romano cheeses with a minty lemon dressing. Very good, but extra points for serving the salad on skewers which made it easy to eat

The Art Institute of Seattle / Panzanella Salad – average as far as panzanella salad goes, but the students were really nice and talked about the program and restaurant

Dragonfish / Korean Bulgogi skirt steak – I go up and down with Dragonfish because they add sugar to everything, but this was fantastic. YUM!

Six Seven / Smoked black cod on crispy plantain with Asian aspic, Whidbey island micro greens – this was my favorite dish of the night

icon Grill / Hot Fudge Sundaes – very good. So good that afterwards I went searching for the guy to get the recipe 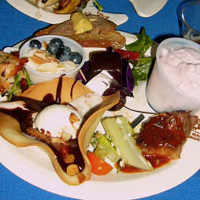 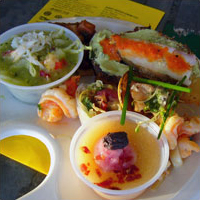