Here is my entry for the latest Food Fight hosted by The Pragmatic Chef. This was a fun one because everyone submitted a favorite recipe and then the recipes were randomly assigned to the participants. With the luck of the draw, I was to make Matt’s “Melonhead’s Venison Salad”.

Here is the recipe I was given:

“Slice Venison tenderloins into 1/4 thick medallions. Rub with olive oyl then sear. Add whatever variety of hot sauce or peppers suits your fancy. I prefer roasted jalapeno for the flavor. simmer a little then stir in a pinch of garlic, sesame seed and a couple huge spoons of peanut butter. When meat is done, serve over lettuce and garnish with mandarin oranges.”

Here is what really happened:

First off, I didn’t have any venison, but I did happen to have some elk that I picked up from Exotic Meats. Never having eaten elk before, I was surprised by how dark the meat was and by the thick striations. It resembled flank steak, so already I was thinking this might be one very tough cut of meat. I didn’t slice the fillets as directed because I wanted to treat them like steak and have a little color in the middle. I rubbed them down with salt and then olive oil and seared both sides over med-high heat. I didn’t have any fresh peppers so I threw in a dried hot chili and then two cloves of minced garlic. Next came about a half cup of chunky peanut butter.

I plopped the peanut butter into the pan and quickly realized that this wouldn’t work. Things were starting to burn and the peanut butter remained in a ball no matter how hard I stirred. I was picturing a creamy sauce, so I added almost a cup of water to get the consistency I wanted. It tasted like something was missing so I added a tablespoon of roasted red chili paste. The sauce was now perfect, but it was difficult making the sauce with the meat still in the pan; next time I’ll remove the meat after it’s seared and then make the sauce.

I let the elk rest while I prepared a simple salad of butter leaf lettuce and orange slices. I topped the salad with a little of the warm peanut sauce and thick slices of elk meat. I had forgotten to add the sesame seeds to the sauce, so I settled for a sprinkling on top.

My first bite of elk had me in disbelief over how tender it was; it was like eating an exceptionally good filet mignon, but with so much more flavor. The meat was rich, but not gamey and almost had a sweetness to it. The elk was assertive enough to stand up to the strong sauce and paired wonderfully with the spicy/salty/sweetness of the peanuts.

Delicious and unusual… thanks Matt, I will be making this one again! 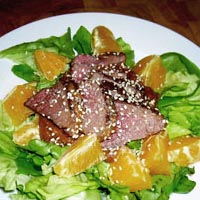