Day two in Oysterville started with a wonderful breakfast strata with sausage and mushrooms. It was hearty, steaming hot and filled with spicy sausage. (I especially love that this dish can be made entirely the night before and simply baked in the morning; perfect for a brunch.)

After a rather long walking tour through Historic Oysterville, we returned to the house for lunch. J had seen a shrimp ceviche recipe on The Early Show (with Bobby Flay) that had caught her eye. I’m generally not a huge fan of ceviche, but only because I’m very particular about it. This recipe was fantastic; well-balanced and not overly citrus-y, the tender shrimp pairing perfectly with the sweet mango.

J had also brought along a savory mango cheesecake from JW Desserts (on Whidbey Island). I’ve yet to visit JW Desserts in person, but I’ve already had several of his cakes. His sculpted cake gallery is amazing and not only do the cakes look great, but they taste great as well. In addition to desserts he also makes savory cheesecakes that are out of this world; creamy, rich and flavorful. J served the mango cheesecake with homemade rosemary crackers from The Herbfarm Cookbook

And just for overkill, J also served fresh mozzarella from Central Market, heirloom tomatoes and basil drizzled with olive oil and good balsamic. With fresh and high-quality ingredients, the Caprese salad is sublime. We washed it all down with a nice RosÃ©.

After lunch we took another long walk, this time along the beach. And then it was time for dinner.

We decided to eat out, despite the warnings from our host that eating out in Oysterville wouldn’t be nearly as good as cooking in. We ended up at Moby Dick’s – a local “hotel” that houses a restaurant. The hotel had an odd style that’s typically described as “funky”; lots of dark paint in the slightly off colors usually found in the paint store’s bargain bin.

We started off our meal with pan fried oysters and a Caesar salad. The oysters were great—as they should be in a town called “Oysterville”. They were plump and briny with a crisp, cornmeal coating and a side of wonderful corn relish. The Caesar salad tasted fine, but since it was made with feta cheese, I’m not sure I’d technically still call it a Caesar. J had the halibut and fennel stew, but something about the dish was very off; the fish was dry and the stew had an unpleasant bitterness to it. R had the pork chops with ancho sauce. The sauce was decent, but as with most pork served in restaurants, it was very tough and rubbery. The best dish of the night was a rib eye steak coated in an olive tapenade served with mashed potatoes and green beans. This dish was solidly good, but not what I’d consider great. Overall it was a decent meal, but for the prices they were charging, I was expecting a great meal. Next time, I’ll listen to our host! 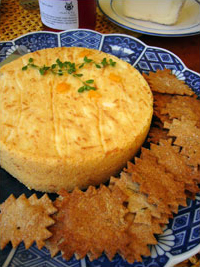