As I’ve said before, I love BBQs. I’m not sure if it’s because they epitomize summer or if it’s just the classic grass-is-greener syndrome since I live in an apartment and don’t own a grill. Either way, when K invited me to her family barbecue I was excited to squeeze in one more before the end of summer.

When I arrived, K had already put out a really delicious salmon and cream cheese spread with crackers and her mother had made these cute little appetizers of cherry tomatoes, marinated bocconcini and basil, which were skewered onto toothpicks. It was a brilliant and portable twist on the Caprese Salad.

For the grill, K had purchased chicken drumsticks and tenders from Trader Joe’s and then slathered them with a bottled BBQ concentrate sauce. This was such a perfect (and easy) idea because it was a mid-week BBQ and there were lots of kids who appreciated the boneless cuts. Which isn’t to say that I didn’t; I made a sandwich out of the chicken tenders and it was great. I had brought along some duck sausages from Exotic Meats. They were a little heavy on the liver taste, but otherwise very juicy and flavorful.

For sides, K made a beautiful (pink) salad of beets and cucumbers that were marinated in pickling spices. Considering that I’m not really a fan of beets, this dish was pretty good. K’s dad made a fantastic potato salad with tender purple and red potatoes, lots of capers and bits of celery.

As delicious as all the food was, the highlight of the evening turned out to be dessert. K has wheat allergies so she’s always making things with spelt. This time she made a plum galette. It had a crust of spelt flour, lemon yogurt and lots of butter, then a layer of frangipane filling topped with fresh plum slices. The flavor was nutty and rich and it had an unbelievable crunch to it—almost like a hard-cooked puff pastry.

Even though I’m sad to see summer go, this was a great send off. 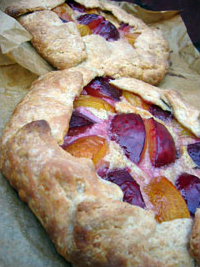 10 thoughts on “The Last Summer BBQ”