I’m still trying to catch up on posts, and yet I still seem to be almost two months behind on everything…

Here are the food highlights from my trip to Portland (Oregon) over Labor Day weekend:

Since this was a vacation, I decided to give my camera a break as well. Although, I just had to snap a picture of this license plate. I couldn’t resist. 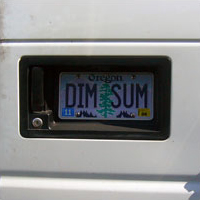