The second annual Independent Food Festival is here, and I have been asked to give an award. I know it’s predictable, but something in the world would be amiss if I didn’t give my award to bacon. Not that I’m giving this award out randomly; this bacon truly deserves an award—or maybe even several. So I present to you the 2006 Independent Food Award – Best Result of Pigs Gone Wild: Wild Boar Bacon.

I discovered wild boar bacon about a year ago and ever since have made it my mission to introduce it to as many people as possible. I’m like a drug dealer except what I’m pushing is legal and much better than crack (so I’m told).

In researching my award, I was shocked to find out that there are an estimated two million wild boar (a.k.a. feral hogs) roaming wild and free in the state of Texas. So many that they are deemed pests—albeit 200 pound pests with razor sharp tusks and a nasty fighting technique called disembowelment. Wild boar are also 90% vegetarian (i.e. they create significant crop damage) and have no natural predators, so hunting season for wild boar is open year-round with no limits, and can be hunted by any means possible, at any time of day.

For this particular bacon, the meat comes from Southern Wild Game, Inc out of Devine, Texas where freelance trappers can exchange their hogs for cash. The wild boar are then sold to Sierra Meats in Reno, Nevada, which then sends the bellies to Dale’s Exotic Game Meats in Brighton, Colorado for smoking. The boar bellies spend 2-3 hours in a vacuum tumbler with a salt and sugar brine, then are cold smoked over hickory for 10 hours. Then the bacon travels to Exotic Meats in Bellevue, Washington where it can be purchased by the public. Yes, the food miles are ridiculous, but this bacon is so worth it. 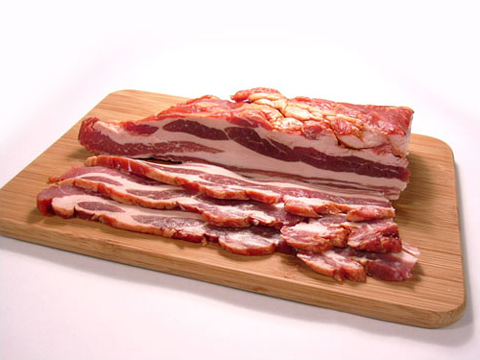 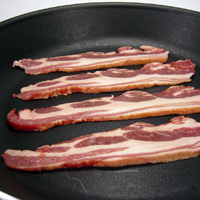 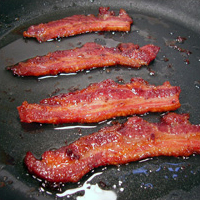